Donald Trump Says “I Will Send All Mexicans Back to Mexico” 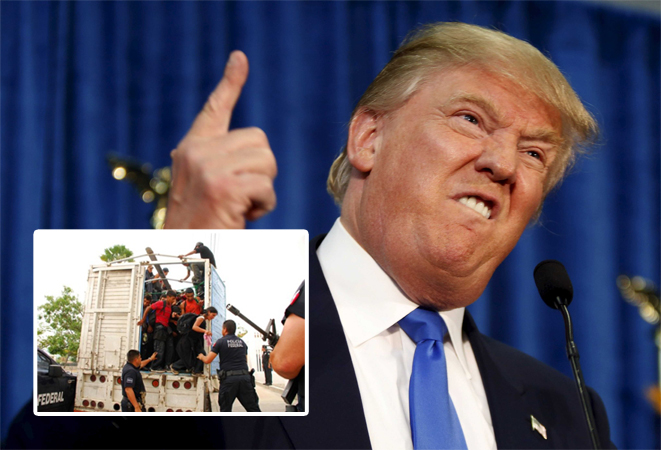 Washington, DC – Today during the speech, Donald Trump said: “I am The President, I will  send all Mexicans back to Mexico”.

United States will close all borders to Mexico for the next 10 years. In addition to closing all borders, all Mexican immigrants will be deported back to Mexico. All Mexican-born U.S. citizen will be sent back to their native land.

“This country used to mean something, all other races knew there place. Now the Mexicans are 11 Million strong and that’s why the ‘Real Americans’ are out of work. Once I become president of U.S, Mexicans will be sent back to Mexico, where they belong!” – said Trump on his campaign trail.

When asked what he would do about the protests and the issue of racially-motivated violence, Trump simply stated:

“THERE’S NO SUCH THING AS RACISM ANYMORE. WE’VE HAD A BLACK PRESIDENT SO IT’S NOT A QUESTION ANYMORE. ARE THEY SAYING BLACK LIVES SHOULD MATTER MORE THAN WHITE LIVES OR ASIAN LIVES? IF BLACK LIVES MATTER, THEN GO BACK TO AFRICA? WE’LL SEE HOW MUCH THEY MATTER THERE.”

Over 80% of Americans demand secured borders and illegal migration stopped. But what would happen if all 20 million or more vacated America ?

If 20 million illegal aliens returned ‘home’, the U.S. Economy would return to the rule of law. Employers would hire legal American citizens at a living wage. Everyone would pay their fair share of taxes because they wouldn’t be working off the books. That would result in an additional $401 Billion in IRS income taxes collected annually, and an equal amount for local, state and city coffers.

Over two million of Mexico ‘s poorest citizens now live inside and along our border from  Brownsville , Texas  to  San Diego , California  in what the New York Times called, ‘colonias’ or new neighborhoods. Trouble is, those living areas resemble Mumbai and Kolkata where grinding poverty, filth, diseases, drugs, crimes, no sanitation and worse. They live without sewage, clean water, streets, electricity, roads or any kind of sanitation.