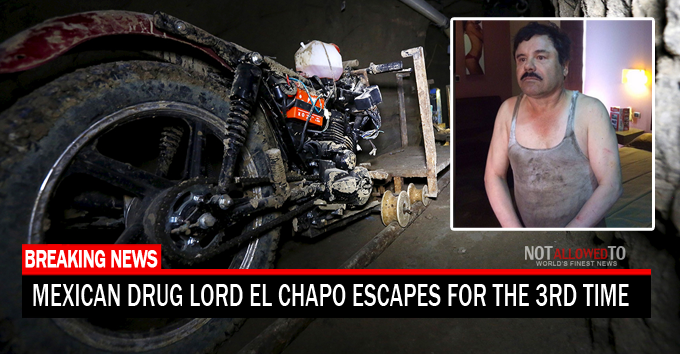 MEXICO – Only a few days after Mexican Drug Cartel Kingpin Joaquin ‘El Chapo’ Guzman was captured and locked in the Altiplano prison in Juarez (the same prison he had escaped from), Mexican authorities have announced that El Chapo has once again escaped overnight, after security guards could not locate Guzman throughout the entire premises of the prison.

Although El Chapo is now known for escaping prisons, new information has revealed that his most recent escape was not another elaborate plan, and virtually required no intelligence. “We made a mistake” says Altiplano prison chief security guard Esteban Marquez, “We thought the hole had been covered right after he escaped the first time. Turns out it never was and he just easily escaped again”. Authorities also found a note that El Chapo had written and left in his cell before escaping, which read:

Which translates in English to:

“hahahaha,  f**king useless pieces of shit, you forgot to cover the hole”.

Mexican Authorities are now investigation are tying to re-capture El Chapo, we will update you as soon as more information is revealed.