Buried Dead ‘Zombie’ Cat Comes Back to Life After 14 Days 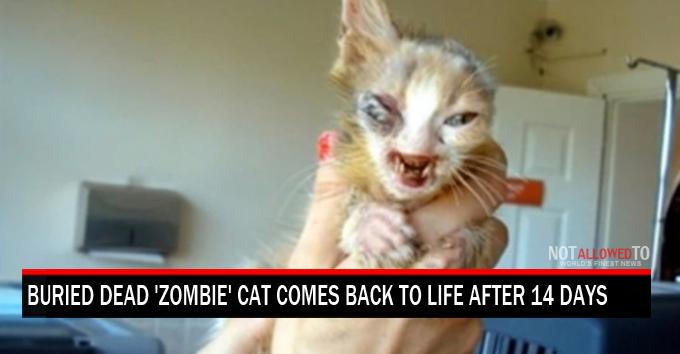 ARIZONA – A family was shocked when their cat reappeared 14 days after they had buried the cat.

Reportedly, the 3-year-old family pet cat ‘Gonzo’ was hit by a car and was believed to be dead when the family decided to bury the animal near Petrified Forest National Park, a few miles away from the family home.

“I almost had a heart attack when I saw my little Gonzo in the window,” admits Tania Harding. “He looked in pretty bad shape, but it was definitely our little Gonzo” she remembers, visibly surprised.

As well as having the surprise of finding their cat alive, the family was astonished that the cat walked over 14 miles to reach the family home.

“How did he find his way back home?” asks Peter Harding, husband and father of two. “I’ve heard weird stories of cats and dogs walking hundreds of miles to reunite with their owners, but we buried the cat, then it had to find its way home and it did all that in an extremely bad shape, this is plain inexplicable” he adds, visibly mystified by the whole affair.

“People have been calling a lot and asking where the cat was buried, some even say that it was buried on an ancient Navajo Indian burial ground. Although they are right that the area of the park where the cat was buried has shown archaeological evidence of Navajo presence in the past, there is no certainty that it is the location of an ancient Navajo burial ground,” he acknowledges. “If people want to believe that the cat was brought back to life by an evil omen or something, they are entitled to believe that. As long as people don’t start burying their dead pets all over the place,” he told local reporters with a grin.

An ancient Navajo Indian belief warns of disrupting the sleep of the dead, as wandering spirits were believed to haunt the burial grounds at night and could take possession of one’s body, particularly on nights of the full moon.