TORONTO – Drake has released the track “Back to Back” to his SoundCloud. And the song, coming on the heels of his Meek Mill diss track “Charged Up,” is Round 2 against Meek Mill.

Last week Meek Mill, a 28-year-old Philly rapper whose greatest claim to fame is dating Nicki Minaj, unleashed a Twitter tantrum against Drake, who guests on Meek’s recent single “R.I.C.O.” Meek claimed that Drake didn’t compose his lyrics on the track, instead seeking out the services of a ghostwriter—a big no-no in the hip-hop community where, even in the post-Diddy era of sampling, originality is paramount: 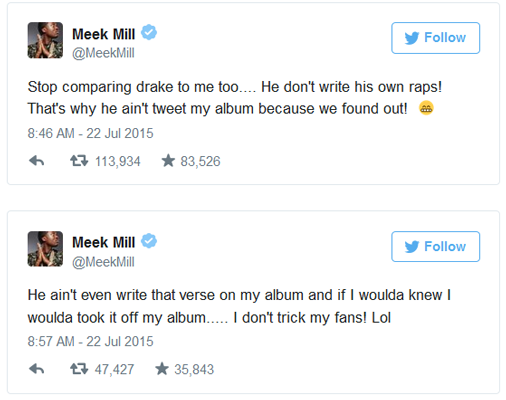 Drake goes at Meek for his “trigger fingers” on twitter (Trigger fingers turn to Twitter fingers / You gettin’ bodied by a singin’ nigga), opening up for Nicki on her tour, and even predicts the two break up in the end “I don’t wanna hear about this ever again/ Not even when she tell ’em that they better as friends”.

He even addresses the ghostwriting controversy as well, spittin’ “This for ya’ll that think that I don’t write enough / They just mad ’cause I got the Midas touch.”

You love her, then you gotta give the world to her
Is that a world tour or your girl’s tour?
I know that you gotta be a thug for her
This ain’t what she meant when she told you to open up more
Yeah, trigger fingers turn to twitter fingers
You getting bodied by a singing nigga
I’m not the type of nigga that’ll type to niggas
Shout out to all my boss bitches wife-in niggas
Make sure you hit ‘em with the prenup
Then tell that man to ease up
I did another one, I did another one
You still ain’t done shit about the other one.

While we wait for Meek’s much-anticipated response now, let us know what you think of this one below!