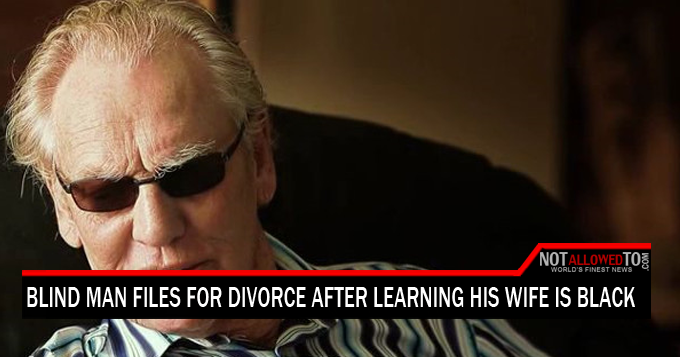 TEXAS | A blind man filed for divorce this morning, claiming that his wife hid from him for 32-years, that she was African American.

Reportedly, the 58-year old John Davis accused his wife, 55-year old Latoyah Davis, of taking advantage of his handicap to “fraudulently and dishonestly make him believe that she was Caucasian”.

He claims that she knew that he would never have married her if he “had known that she was black”.

“This treacherous and perfidious woman abused my generosity and good nature for decades, by pretending to be someone else,” Mr Davis told local reporters. “I only learned that she was black two weeks ago, when a friend told me. She let me believe during all these years that she was white, She’s a despicable fraud! She should be jailed for what she did!”

Ms Johnson refutes her husband’s allegations of lying, saying that she did not hide her skin color, and that she thought he had been aware of it during a those years.

“He ever actually asked me if I was black, but I was convinced that he knew,” she told reporters.“It’s not like I ever pretended to be white! And I’m the one who pays for everything, who does his laundry and cooks for him… I don’t see how he can say that I took advantage of him. I’m the victim here… I’ve spent 32 years of my life, taking care of a racist jerk.”

Although Mr Davis’ allegations are unlikely to have any effect on the results of the divorce procedure, they have already generated a lot of reaction, both from the audience inside the courthouse and on the social media.

This controversial case is scheduled to appear in court again next Monday, unless the parties reach an improbable agreement before that date.