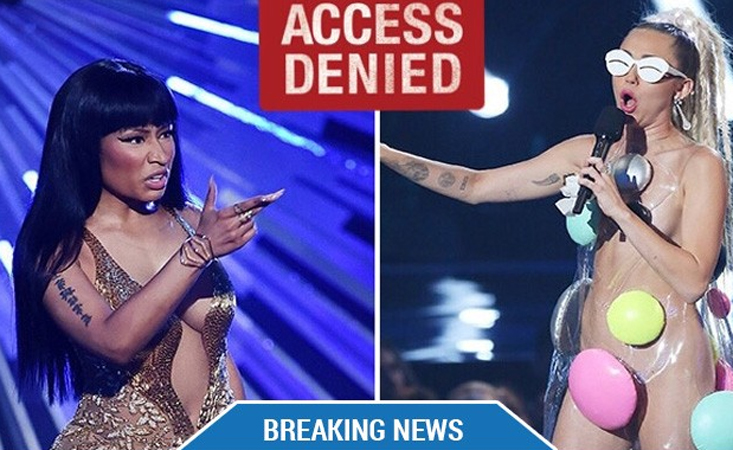 According to reports, there has been a lot more than its been reported by main stream media. Nicki Minaj got in fight with Miley Cycus at VMA’s backstage.

“I TOLD THAT LIL B*TCH TO KEEP MY NAME OUT HER MOTHERFU*** MOUTH OLE BONEY ASS HO, TRYNA THROW SHADE ON MY BOO MEEK! SHE KNEW THAT A** WHOPPING WAS COMING” – said Nicki to reporters at the VMA’s.

It all started with an interview where Miley was throwing shade at Nicki, Nicki almost body slammed Miley Cyrus, later she was rushed to the hospital with a concussion.

A bystander who saw the whole fight says:

“NICKI WASN’T PLAYING NO GAMES SHE SQUARED UP BUT MYLEY KEPT SAYING SORRY I DIDN’T MEAN IT AND NICKI HIT HER WITH A TWO PIECE GRABBED HER AND BODYSLAMMED HER TO THE FLOOR, WE ALL THOUGHT SHE WAS DEAD”

Miley Cyrus reportedly said as she was led away on a stretcher:

“I DON’T WANNA BE BLACK NO MORE AFTER THIS, I’M FILING A RESTRAINING ORDER AGAINST THAT CRAZY BI***.

There is a video of the incident but Miley’s lawyers had threatened to file a lawsuit if it is leaked because it will ruin her image.