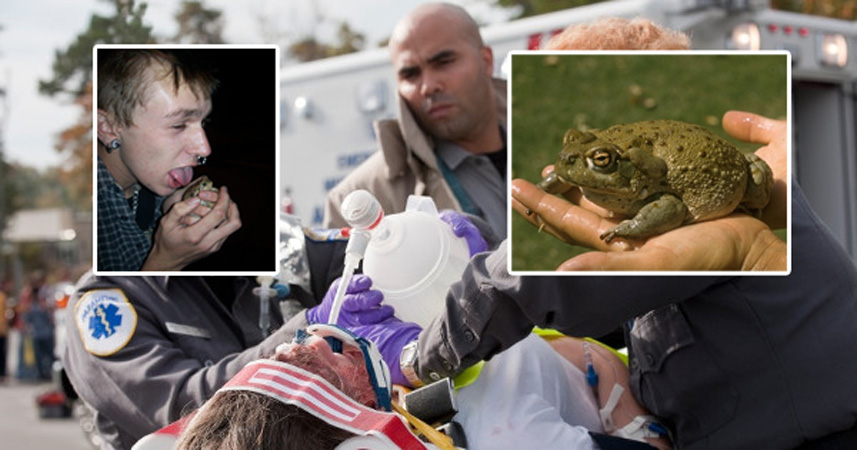 PHONIX – Three young teenagers have been hospitalized after licking toads in an  attempt to get high.

According to reports three teenagers are from Arizona, and were admitted at the St. Joseph’s Hospital and Medical Center this morning, after licking psychoactive toads.

Justin Murphy,19, Darell Sanders,18, and Eric Adams,18 who are students from the Mountain Pointe High School, were hospitalized after suffering from a severe intoxication and are still in a critical state.

These kids say they just found the toad, and decided to lick it to get high, like they had seen people do in movies. That’s a really stupid idea, they could have killed themselves! These kids were on the brink of overdose when they arrived at the hospital. It’s a miracle, that none of them died!

The teenagers were celebrating their high school graduation in the Sonoran Desert. Around midnight, Justin Murphy allegedly moved away from the group to relieve himself in the desert, and sighted a large toad on the ground. Remembering something he had seen in Hollywood movies, he decided to catch it, and to bring it back to the party so he and his friends could get high by licking it.

Unfortunately, the toad  the young men caught, was an Incilius alvarius  also known as the Sonoran Desert toad or Colorado toad. It is one of the most dangerous type of psychoactive toad in the world, and is found in northern Mexico and the southwestern United States.

Incilius alvarius can grow to about 7.5 inches (190 mm) long and is the largest toad in the United States . Its primary defense system is glands that produce a poison that covers its skin, and may be potent enough to kill a grown dog. It contains 5-MeO-DMT, a powerful psychedelic tryptamine, as well bufotenin, an alcanoid related to the neurotransmitter serotonin.

In Arizona, the Incilius alvarius has been designated as “endangered” and the law states that  “It is unlawful to capture, collect, intentionally kill or injure, possess, purchase, propagate, sell, transport, import or export any native reptile or amphibian.”

The teenagers could now face some criminal investigation, as the Phoenix Police Department has confirmed that an investigation had been launched.

The teenagers could, therefore, face some very serious charges, including capturing and harming an endangered animal, as well as charges  of possession of illegal drugs.