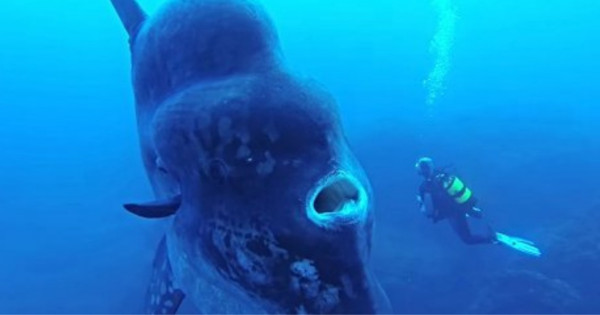 A cameraman working for the famous scientific magazine National Geographic, is reportedly presumed dead after being swallowed by a giant Mola Mola fish while shooting a documentary off the Portuguese coast.

Joaquín Álvarez Santos, 29, from Chiclayo in Peru, was shooting underwater images on the pygmy sperm whale with four other divers, when the giant predator appeared.

The giant creature, probably weighting more than 2000 kg (4400 lbs), immediately headed towards the cameraman and swallowed him before swimming away.

Another diver, Australian photographer James C. Wyatt, captured some incredible pictures of the scene, just before the terrible incident.

“I saw the giant fish approaching and I thought it would make a great picture,” M. Wyatt told reporters. “I never thought he would attack Joaquín! Sunfishes are usually very docile, and they almost never attack. It all happened so fast, he just disappeared inside the fish’s mouth. I still can’t believe it happened.”

Sunfishes live on a diet consisting mainly of jellyfish, salps, squid, crustaceans and small fishes, but specimens of greater size have also been known to attack larger preys like sharks, whales of even small fishing boats.

Deliberate attacks on humans are extremely rare, and M. Santos is the first known victim of a Mola Mola since 1987.