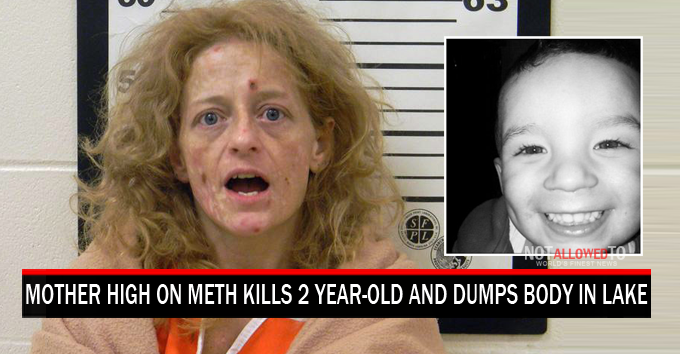 FLORIDA – A 27 year-old mother has been charged with murder of a 2 year-old, after her child was found dead and stuffed in a suitcase.

According to police report, they were called to a residence in Callaway on Tuesday, when they arrived at home, the woman was standing outside, and was “distraught.”

As the police officer walked toward the woman, she confessed to the murder. The woman ranted to officers about a Biblical flood and Noah’s ark, and that she may have been “delusional.” The 27-year-old mother identified as Egypt Moneeck Robinson was taken into custody and was also treated at a local hospital and toxicology reports revealed a “rather high” amount of methamphetamine in the body.

The two year old boy named Aries Juan Acevedo was discovered floating in a lake behind the house in a suitcase. Authorities believe the child had most likely been dead for more than 24 hours. He may have been killed by a stab wound.

On her way to the sheriff’s office, the deputy wrote in his report that the 27-year-old made several unprompted statements about the impending end of the world, and how she was trying to save her son from a Biblical flood.

‘The world is going to flood and everyone was going to be drowned,’ Robinson was quoted as telling the officer before declaring, ‘I was just trying to save my baby!’ She later added: ‘Everyone on Noah’s Ark relieved and my baby will relive again!’

The investigation is ongoing and additional charges are pending…