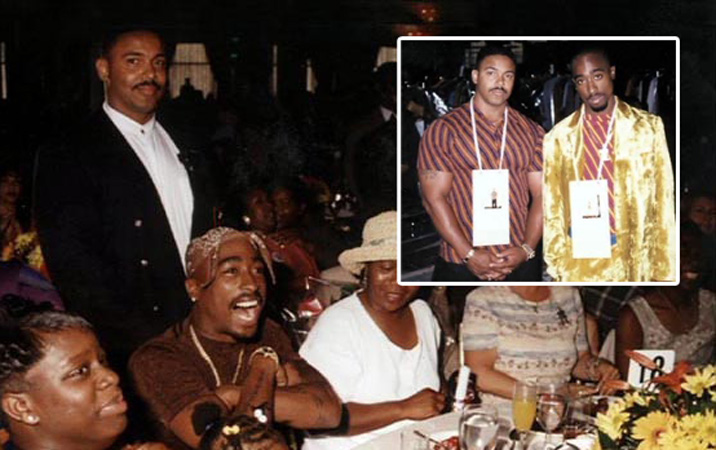 Tupac’s former bodyguard Frank Alexander who has died, left an archive interview in which he revealed who he thinks was the killer and what happened that night.

How are doing Frank and how you became Tupac’s personal bodyguard ?

Just doing fine, I spent 11 years in the Marines and one day I got a cal from a friend of mine, asking me if I wanted to work security for Death Row Records, owned by Marion ‘Suge’ Knight.

How much did you get paid?

About $300 a day, but there were other perks, like weed and women.

Tupac was close to Mike Tyson, wasn’t he?

He and Tupac had a lot in common: the bad boy thing. It goes back to where they came from. I remember one time on tour, Tupac had Mike come up on stage and do a song with him. Pac started rappin’ about Mike and Mike so excited.

Tupac didn’t mind a scrap, did he?

Pac wasn’t a big guy: 5 foot 7 inches and 160 pounds, but he loved to fight. It was my job to neutralize those situations before they got out of hand.

Didn’t he get into a fight on the night he got shot?

That’s right. It was with Orlando Anderson. That was the kick-off for everything that was to eventually happen. A friend of Suge Knights came up to Tupac and whispered that he had spotted Orlando Anderson in the arena. Tupac ran over and that’s when they got into it. I ran over and saw Tupac throw a couple of blows.

After the fight we planned to go to 662, Suge’s club. We were hanging out in the hotel lobby. But first Suge wanted us to go over to his place so that he could change. When we left Suge’s we had an entourage… 16 to 20 cars full of women, friends and groupies. We had stopped at the lights when this white Cadillac just rode up. This black gun stuck out of the back window and just started blasting the back of Pac’s BMW. All we saw was the gun-smoke. They blasted into the car 13 to 15 times and took off.

But you were with Tupac, right?

No, Pac had asked me to drive Kidada’s car. He wanted me to drive The Outlaws [Tupac’s posse] cos they were gonna be drinking and I was the only one who wasn’t. My gun was in my car, plus the law of the State of Nevada states that it’s illegal to carry a weapon.

After the shooting, Suge Knight held you responsible for Tupac’s death. How did that make you feel?

A lot of people thought it was my fault, but I had very few options. I was asked to ride in Kidada’s car. I had no weapon and the car had no gas. Had I been in my car I could have followed the Cadillac and possibly shot at it.

Were you afraid of Suge Knight?

I’ve lived the life of a rap star. I got used to five-star restaurants, five-star hotels… the best of the best, man. I had all that fun and then I had to go back to being an average Joe who has to worry about paying the bills. If I got the opportunity to do it again tomorrow I’d have to do a whole lot of thinking.

We will update the article, please subscribe us by leaving an email.