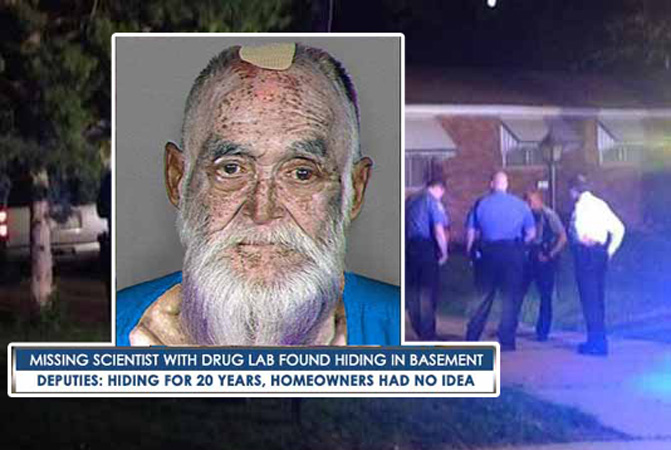 MINNESOTA – A Couple called police after they thought a man broke into their home because they could hear someone yelling and shouting in basement; turns out to be a scientist living/hiding in a secret drug lab hidden in basement.

According to the police report:

We could hear someone yelling and strange noises but apparently there was no one in the basement, as the sounds were coming from behind a large storage cabinet. Once we moved the cabinet; we were shocked to see a door way to a large hidden room behind the cabinet in the basement. The room was full of various science equipment along with a terrified old man.

The 83 year old man was identified as Dr. Winston Corrigan, a chemistry professor from the University of Minnesota who went missing in august 1984 and was a previous resident of the home.

“He had been living in secret drug lab for a long time and had suffered severe psychological trauma, probably from not socializing with anyone for a while…or from ingesting a lot of the drugs… I don’t know if he had been living down there since the 80’s but I wouldn’t doubt it” Said the officer Landon Choler.

The cops found more than half a million dollars worth of stolen equipment from the university that Corrigan used to work at, which includes 3 hand guns, an assault rifle, 50 years’ worth of military grade rations and twelve 55 gallon barrels (including three almost empty barrels) of what DEA labs have identified as pure liquid Lysergic acid diethylamide, a powerful hallucinogenic drug more commonly known as the street name LSD or Acid.

It is not yet known if Dr. Winston will be convicted of any crime. He is currently being held at a Hospital for observation and will undergo a psychiatric evaluation to determine the extent of any psychological damage and possibly reintroduced to modern society.