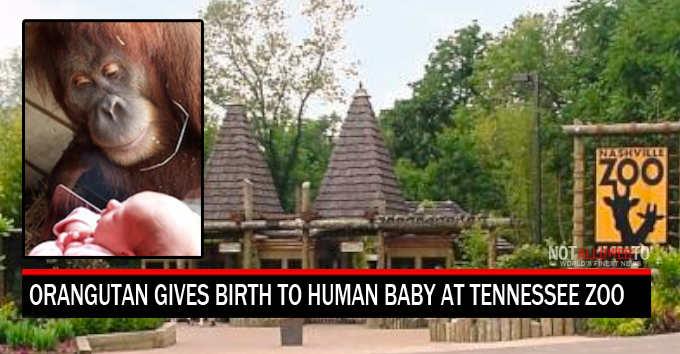 NASHVILLE, TN – After Lucy, a 200 pound orangutan at a Tennessee zoo, gave birth to a human baby girl this weekend, Creationists have suffered what appears to be a final devastating blow to their theory of how mankind came into existence.

The birth is the final piece of the puzzle for evolutionists, who have long been waiting for a human to evolve from a monkey or gorilla.

Until now, critics of evolution have used the fact that they have never seen a fish transform into a human and come to the conclusion that a supreme being must have made mankind. And some creationist remain resolute in their beliefs, claiming that a gorilla baby human is not sufficient evidence to prove that we all evolve from gorillas. “How do we know it’s not half human? I mean, is there any proof that someone didn’t climb into the cage and rape the gorilla?” commented John, a creationist from Mobile, Alabama.

“If you look carefully, the baby looks Chinese and I don’t see any Chinese gorillas in that cage. I just don’t have the faith to believe a human magically appeared from an ape.”

An evolutionary biologist spoke about the findings: “Until this birth there has been no evidence whatsoever to support the theory of evolution; it was nothing more than guesswork. But now we have for a fact that humans evolved from gorillas, we don’t have to go around blindly following Darwin’s teachings.”

Many protesters are blaming this “strange birth” on DNA manipulation. Creationists are demanding a search of the premises by authorities claiming they believe “illegal tampering of human and animal DNA” is happening at the zoo.

Authorities say they have not yet decided whether or not they are going to pursue any criminal charges or a formal investigation.