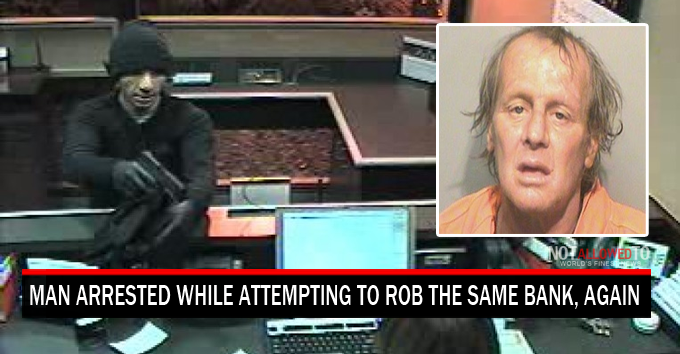 Anaheim, California – Police have interrupted a robbery this morning, arresting a man who was allegedly attempting to rob the same bank for the 2nd time.

According to police report, 57-year old Roger Martin, entered the Chase Bank branch around 9:00 AM, carrying what appeared to be an Ak-47. He gave a note to a bank employee, asking for $50,000, like he had allegedly done on previous robbery.

Unbeknownst to him, however, police had been watching the site for the last two days and the robber walked right into a trap. Two undercover policemen were waiting for him inside.

Less than two minutes after entering the bank, the robber disarmed by the undercover policemen, who then proceeded to his arrest. The officers found 2 grams of crystal meth in his pocket, as well two concealed pistols.

“If you commit crimes in our jurisdiction, you will pay for it,” District Attorney, David Roovler, told reporters. “ This man thought that he was a criminal mastermind and that he could keep committing robberies without getting caught.”

Mr Martin is far from the first criminal to hit the same target on multiple occasions. According to a spokesman from the Orange County Sheriff’s office, Mr. Martin isn’t suspected of any other robberies targeting other banks, and seems to have concentrated all his efforts to this single site, robbing it second times since March 2013.

He now faces a total of 37 criminal charges, including armed robbery, illegal possession of an assault weapon, carrying a concealed weapon and possession illegal drugs. He is expected to appear in court next Monday.