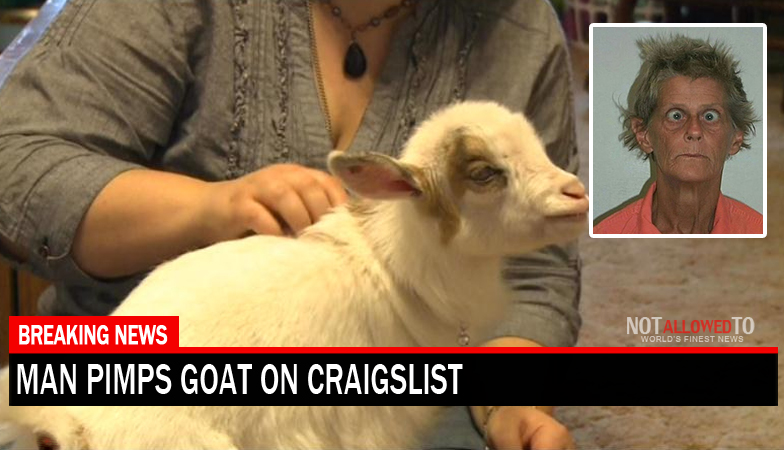 ARKANSAS – A man is arrested and charged with solicitation of an animal after posting an ad on Craigslist offering his goat Muffin for “services.” Police tracked down 49 year-old David Frederic in an undercover sting operation.

According to report, Cops arranged to meet Frederic and his goat after they told him what kind of ‘things’ they were into in regards to the animal. After agreeing on a location, they show up to the hotel where Frederic was ready to hand over Muffin for 30 minutes. After the undercover cop handed over the negotiated fee of $350, undercover agents took down Frederic.

In a recorded confession at the police station, Frederic admitted to making over $100,000 with the nearly 300 arranged ‘play dates’ with the animal. “I captured this goat on the side of the road two years ago,” Frederic admitted in his recorded confession. “People love goats. I had several of my friends pay me to have some alone time with Muffin. Then I figured, why not make an online business out of it. Muffin didn’t seem to mind. I don’t see how I did anything wrong. I wanted it, they wanted it, Muffin wanted it…. we were all willing parties in the transaction.”

Police has investigated several Craigslist animal sex cases over the past three years. “Animal meet ups seem to be the new go to thing when it comes to men that are shy with women,” said Lieut. Thomas Washington. “There seems to be a lot of money in it.”

Muffin the goat was treated for tears and lesions, but is said to be doing fine. He is currently up for adoption.