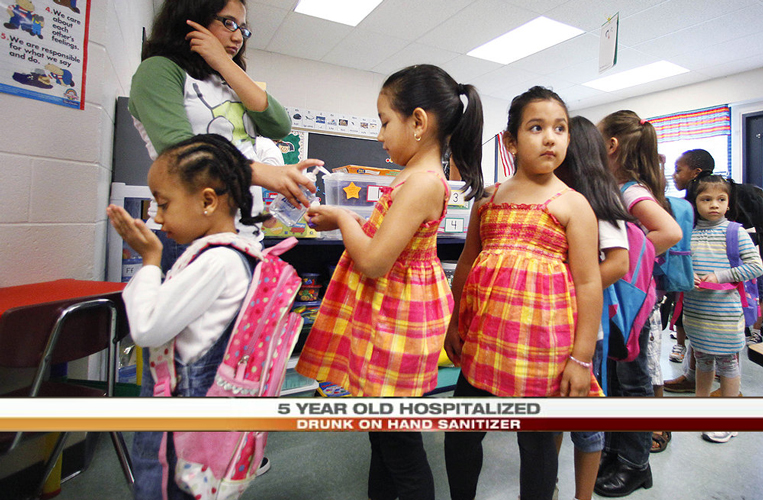 ATLANTA – Six-year-old Nhaijah Russell was rushed to hospital after she swallowed three or four squirts of liquid hand sanitizer at school.

It tasted good, like strawberry – said the six year old.

It also contained enough alcohol to make her dangerously drunk.

Since 2010, poison control center across the United States have seen a nearly 400% increase in calls related to children younger than 12 ingesting hand sanitizer, nearly quadrupled across the U.S. in just a few years, Cases jumped from 3,266 cases in 2010 to 19,117 in 2014.

“A kid is not thinking this is bad for them,” the poison center’s director, Dr. Gaylord Lopez.”A lot of the more attractive (hand sanitizers) are the ones that are scented. There are strawberry-, grape-, orange-flavored hand sanitizers that are very appealing to kids.”

Nhaijah Russell, swallowed squirts of strawberry-scented hand sanitizer at her school, she began to slur her words and by the time she reached the emergency room she could hardly walk. Her blood-alcohol level was .179, twice the legal limit for an adult.

Some kids reportedly ingest hand sanitizer on purpose, to get drunk or as a dare.

The amount of alcohol in hand sanitizer ranges from 45% to 95%. Ingesting even small amounts, as little as 2 to 3 squirts in some cases, can cause alcohol poisoning. By comparison, wine and beer contain about 12% and 5% alcohol, Lopez said

“That was very scary,” the mother, said. “It could have been very lethal for my child.”

Alcohol poisoning can cause confusion, vomiting and drowsiness. In severe cases, a child can stop breathing.