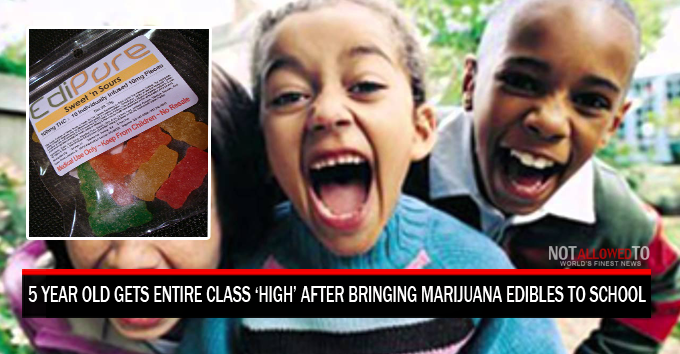 St. Louis, Missouri | 18 kindergarten students were taken to a emergency room after a 5 year-old boy brought marijuana edibles to class and handed them out.

Apparently, his mom, 21-year-old Candace Freeman, has been arrested and booked on child endangerment charges after she left her homemade edibles on the counter, giving her 5 year-old access to the drugs.

“I always allow the children 10 minutes in the morning to socialize,” said Missy Gilbert, the kindergarten teacher in charge of class. “I got them all settled, and about 30 minutes later, they all started giggling uncontrollably. I was really starting to get angry because none of them would listen to me. They began falling out of their seats, crying, laughing, saying ‘wow’ and one kid was huddled in the corner crying that the police were looking for him. Two of the little girls began twerking, I had no idea what was going on. That’s when I called the principal in for help.”

The principal and several teachers showed up in the room trying to figure out why there was so much chaos going on.

That’s when one of the children told the teacher that the boy was handing out candy during social time. That’s when they searched the young man’s backpack. What they found were marijuana laced gummy bears, according to police.

All 18 children were transported to a nearby hospital, where they were treated and released once the marijuana effects wore off.

The boys mom, Candace Freeman, was picked up at her home by police and booked. The young man still remains and child protective custody. Authorities say there is no family member responsible enough to take him in at this time. According to police, this is not Freeman’s first drug offense.