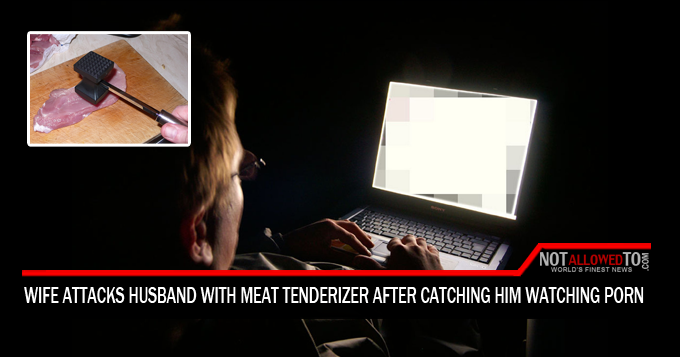 A furious wife attacked her husband of 50 years with a meat tenderizer after she caught him watching p0rn.

The woman repeatedly hit her 78-year-old husband over the head at their home, thinking he was trying to destroy evidence of p0rn0graphy. The court heard how Mr Holmes ran into the street bleeding and told neighbours his wife had gone ‘mad’.

When police asked Mrs Holmes what had happened, she said:

I caught him watching p0rn. He tried to get rid of it. I’ve seen red and attacked him. I wanted to kill him.

It should be murder. I want 10 years of my life back. I saw red mist.

He hasn’t touched me for over 10 years and now he’s watching p0rn. How dare he? How do I go about getting 10 years of my life back?

Mr Holmes apparently told police that he feels ‘partly responsible because of his selfishness’ by playing golf, playing in a band and ‘spending considerable time away from home and not supporting his wife’.

His wife, pleaded guilty to inflicting grievous bodily harm and was given a 10 month jail sentence suspended for 18 months.