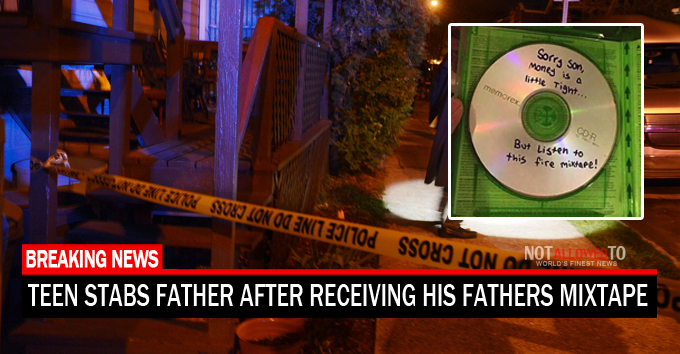 SEATTLE – A teenager named Jake Reay reportedly stabbed his father after his father apparently gave Jake his rap mixtape as a Christmas present.

Jake’s father, Desmond Reay, is currently being treated in the hospital for knife wounds after his own son stabbed him. Christmas Day turned out to be a disaster for the family.

According to Jake’s mother, her and her husband Desmond were on a tight budget and could not afford to give their kids the gifts they desired, so Desmond came up with the idea to record a Christmas themed rap mixtape, wrap it up in gift paper, and give each of their kids a copy of the mixtape. She claims she never knew Jake would do such a thing to his own Father.

According to family members, Jake was opening the present his dad had given him, when he suddenly made a disgusted facial expression before he reached for a knife and stabbed his father on the arm and shoulder while yelling “How can you give me this weak as sh*t on Christmas”.

On the mixtape was written “Sorry son, money is a little tight… but listen to this fire mixtape!” Jake will face attempted murder charges and can face years of jail time if tried as an adult. Desmond is expected to live after further treatment.