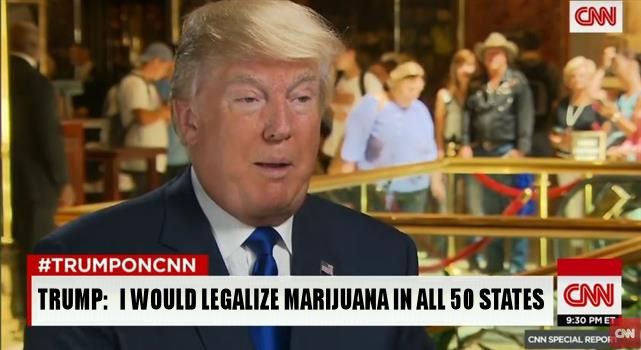 Marijuana to be legalize across the country – Donald Trump.

Donald Trump claims US drug enforcement is ‘a joke’ and all drugs should be legalized to ‘take the profit away from these drug czars.’ The tax revenues from a legalized drug trade will be used to educate the public on the dangers of drugs.

It’s no surprise that Trump’s isolationist tactics of building a wall that divides Mexico and the US along with banning all Muslims from entering the country has spilled over to international drug trade. Trump insists that our jobs are being taken away by India, China and Mexico — including the esteemed title of ‘drug czar’.

Under President Trump, if drug lords are to be created, they better be made in the USA — and how can you blame him? Our drug dealers have been outsourced to other countries for far too long. If America hopes to create the next Walter White, we must locally foster and create drug lords and keep them within our borders.

Trump also stated we’re losing badly the war on drugs, and you have to legalize drugs to win that war.

According to Trump, getting a ‘win’ against the war on drugs starts with complete legalization of all drugs.

Now that Trump has shifted from business man to a political Frankenstein created by the GOP and the media, his stance on marijuana has slightly shifted. In a November interview with GQ last year, Trump states ‘[marijuana for] medical purposes for medicinal purposes it’s absolutely fine.’

While his stance on marijuana may seem to change, his belief that the ‘war on drugs’ is a joke has not. On ABC’s ‘This Week,’ Trump told host Martha Raddatz that the country is doing a ‘poor job’ policing drugs; specifically, “We don’t want to do anything. And if you’re not going to want to do the policing, you’re going to have to start thinking about other alternatives.”

But it’s not something that I would want to do. Don’t worry, I speak double-talk Trump — let me translate. Donald Trump simply restated his 1990 position on the War on Drugs however the semantics have shifted to him exploring ‘other alternatives’ to alleviate this problem.

In that same statement, Trump insists that we (he) doesn’t want to do anything about the ‘war on drugs’ solely because he believes the enforcement isn’t working. Of course the only remaining ‘other alternative’ to his proposal is something that he’s reiterated in the past, complete drug legalization.

In 2004, Trump told CNN’s Wolf Blitzer that he identifies ‘more as a democrat’ and that it “seems that the economy does better under the Democrats than the Republicans.”

That tilt towards the center would also reflect his previously held stance on drug legalization. Compared to current field of presidential candidates, Trump has held the most radical stance against the enforcement of marijuana and other drugs for for the longest duration.

According to a 2012 RAND report commissioned by the White House, the organization found that $100 billion dollars a year is being generated by illegal drug trade in America, with $40 billion coming from marijuana.

As far as the failed drug enforcement that Trump has repeatedly talked about for decades, in 2010 the federal government spent $15 billion on the ‘war on drugs’ with states and local governments spending an additional $25 billion.

When it comes to the superfluous government spending that Trump denounces at his rallies and debates, $40 billion could be saved just from doing what he said he would do: stop the war on drugs. In fact, Trump would save 400% more from cutting federal and state level enforcement on drugs than he would from ending Common Core.

The real question is, will Trump come through on the multitude of platforms he’s been promising the American people. That’s yet to be determined.

However, if Donald Trump’s words are to be believed as truth, then it’s clear that Donald Trump will be the biggest proponent for the legalization of marijuana in our country’s history.