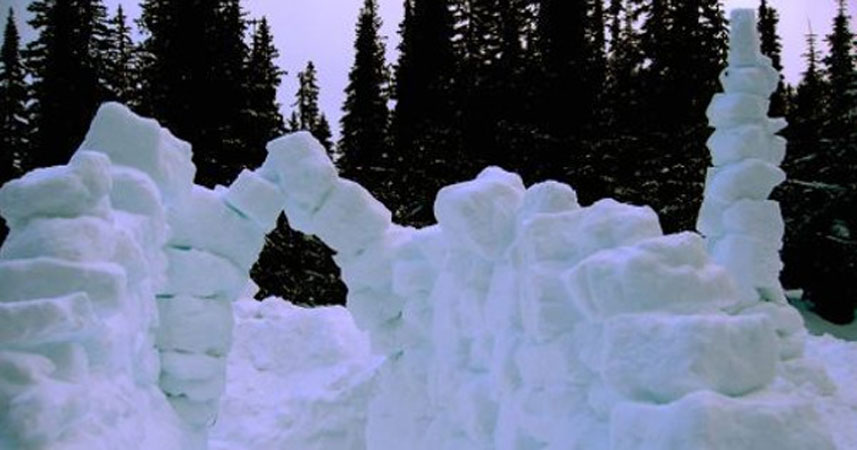 Archaeologists from the University of British-Columbia, have discovered the ruins of snow fort in Northern Canada, built by the Royal Northwest Mounted Police in the 19th Century.

The team of scientists, led by Professor James Monroe, were searching the area for the ruins of Fort White, a long lost outpost used by the federal police force of Canada in the 19th Century to monitor the rebellious native tribes of the region.

Flying over the area aboard a helicopter, they located the ruins of an imposing snow structure on a strategic, elevated point near the mouth of the Thelon river, in the Canadian Northwest Territories.

Upon investigating, they discovered dozens of artifacts linked to the Royal Northwest Mounted Police, including a hat, a belt buckle, a revolver and a cufflink.

According to the archaeologists, the ruins could be those of the mysterious Fort White, an outpost built in 1891 and used by the predecessor of the Royal Canadian Mounted police until it was abandoned in 1901.

“The site seems to have been designed to hold a garrison of 20 to 30 policemen and to protect them from the cold and from the surrounding native tribes,” Professor Monroe told the Northern Tribune. “We did not expect to find a structure made entirely of snow, but I guess it was the easiest building material to find in the region.”

Mr Monroe says the ramparts of the fort stood an imposing 5 meters high and were surrounded by ditches, making it an extremely efficient defensive structure against the local native tribes.

The pacification and colonization of the Canadian Northwest were marked by many revolts from the local native tribes.

The desire for independence of Manitoba’s Métis, a mixed blood people of joint First Nations and European descent, erupted in the Red River Rebellion in 1869 and the later North-West Rebellion in 1885.

To avoid any further revolts, the Canadian government created a federal mounted police force and ordered the construction of several forts across the plains.

Fort White was cited in many documents as the northernmost fort built at the time, but both its physical appearance and its precise location remain the subjects of many speculations.

Professor Monroe and his team will return to the site in April to carry a more thorough investigation and try to determine if the snow structure they have discovered is, indeed, the mysterious Fort White.