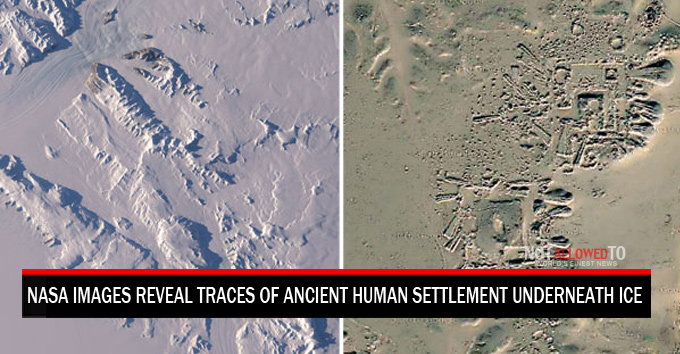 WASHINGTON – The recently released images of NASA’s Operation IceBridge mission in Antarctica revealed what some experts believe could be the existence of an ancient human settlement lying beneath 2.3 KM of ice.

The discovery was made during aircraft tests trials of NASA’s Advanced Topographic Laser Altimeter System (ATLAS) Lidar technology set to be launched on the Ice, Cloud and land Elevation Satellite-2 (ICESat-2) in 2017, that aims to monitor changes in polar ice.

“There almost “ZERO-ERROR” when it comes to individual photons hitting on individual fiber optics, that is why we were surprised when we noticed these abnormal features on the lidar imagery,” explains Nathan Borrowitz, IceBridge’s project scientist, NASA.

“As of now we can only speculate as to what these features are but the launching of ICESat-2 in 2017 could lead to other major discoveries and a better understanding of Antarctica’s geomorphological features” he adds.

Leading archaeologist from the University of Calcutta, Ashok Tripathi, believes the remote sensing photography show clear evidence of an ancient human settlement beneath the ice. “These images clearly shows some sort of human-made structure. The patterns are not by natural geomorphological formation of nature. We clearly have here evidence of human engineering. The only problem is that these photographs were taken in Antarctica under 2 kilometers of ice. That is clearly the puzzling part, we do not have any explanation for this at the moment,” he admits.

“These images just show a small portion of Antarctica’s total land mass. There are possibly many other additional sites that are covered over with ice. It just shows us how easy it is to underestimate both the size and scale of past human settlements,” says Dr Tripathi.

Historian at the University of Cambridge, Steven Richard, believes there might be a rational explanation.

A slight pole shift or displacement of the axis of rotation of the Earth in historical times is possibly the only rational explanation that comes to mind but we definitely need more research done before we jump to any conclusion.”

ICESat-2 (Ice, Cloud, and land Elevation Satellite 2), part of NASA’s Earth Observing System, is a planned satellite mission for measuring ice sheet mass elevation, sea ice freeboard as well as land topography and vegetation characteristics, and is set to launch in may 2017.