Woman Arrested For Attacking Hubby With Knife For Farting 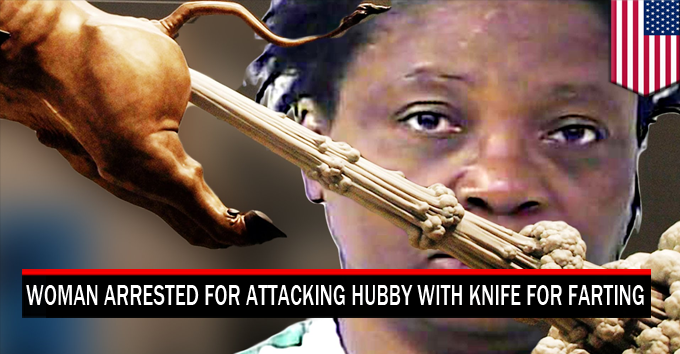 FLORIDA – A woman was arrested and charged for domestic battery after allegedly attacking her husband for farting in bed.

According to report, the incident occurred around 2:30 AM on Thursday at the home of Dawn Meikle. Meikle told police that his wife started elbowing him every-time he passed gas.

“Dawn started kicking/elbowing him every time he would fart,” according to the affidavit. “But when the farts became ‘disgusting, loud and wet sounding’ Dawn bought a knife from a kitchen, and stabbed her husband in the buttocks.”

That’s when her husband fell out of bed, grabbed the phone and called 911.

“I opened the bathroom door to see if she was gone,” said the husband. “But she snuck around the corner and stuck her foot in the door, and that’s when I maced her crazy a** with pepper spray.”

Meikle was arrested and charged with domestic battery. She claims she was the true victim of this entire incident. “If YOU had smelled his nasty farts, you’d understand,” Meikle said.

She was taken to the St. Lucie County jail where and was later released on $5,000 bound.