Racist Under Investigation For Halloween Decoration That Features Obama Tombstone 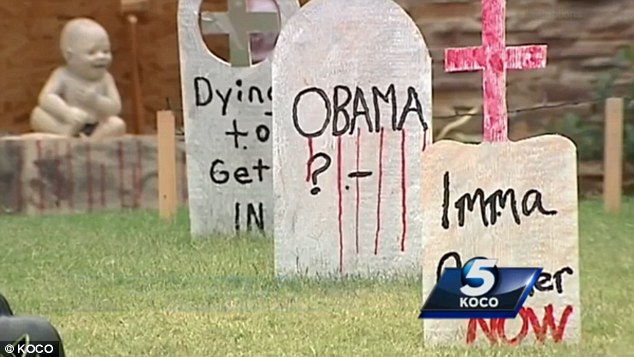 There is still so much hate and racism in the world. A woman from Oklahoma is asking the public to share this story after she took a picture of her neighbors’ choice in Halloween decoration- a graveyard featuring a Barack Obama tombstone.

Jamilla Phillips of Oklahoma says she was shocked to see the Obama tombstone in her neighbor’s yard as part of his Halloween display. The tombstone features President Barack Obama’s name with a question mark where his date of birth should be.

“I was absolutely offended,” said Phillips, who is new to the neighborhood, to KOCO News. “He is the president of the United States, and it actually is about respect. It’s a total respect thing because this person is still alive.”

Dwane Dockens is the name of the person who created this tombstone. He says it has been displayed in his yard for the last three years and he has never gotten in trouble for his freedom of speech. He claims he made it a few years ago when the issue of the president’s birth certificate was a hot topic.

“And we made all these ourselves, so just thought it was kind of humorous and, you know, went ahead and put him in there as well,” said Dockens.

Dockens said he doesn’t care about people’s opinions, and he isn’t going to take the tombstone down.

Jamilla Phillips said the tombstone is not sending the correct message to children.

Another racist neighbor in the community said she is patiently waiting for this joke to become a reality.