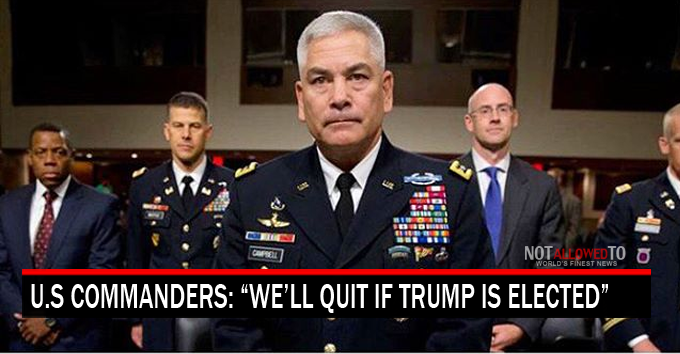 UNITED STATES – Donald Trump spent most of recent “foreign policy debate” proclaiming how he’d make our military extraordinary and criticizing President Obama for “weakening it” and affirming absurd bravados of how we will turn into a “strong country” with a horrifying and coldhearted methodology that includes shutting our borders to desperate emigres and persecuting Muslim-Americans for their faith.

Then again, when one asks the military officers from the Pentagon what they think about this potential Commander-in-Chief’s plans for the military, we hear an different story. According to reports, a decent number of Pentagon officials are planning to quit if Trump gets elected in protest of his vile desecration of the values that they have sworn to die defending.

Trump’s attack plans for Islamic State, known as ISIS is to band Muslims from the United States, his proposals of restricting or limiting the Internet can secure the United States, are an attack against the values they vowed to die to defend.

There are fears of being requested that carry out futile war arranges that would bring insecurity and instability. All of today’s commanders are veterans of the wars in Iraq and Afghanistan, They all know somebody who died in battle. The individuals who send them, sit miles away.

Thus over the discussion, plots of an alternate develop—possibilities in case that Trump is elected to the White House.

“By 2016 I will have my 20 years in and can get out of here,” one military official said, referring to the amount of time a service member needs to collect retirement pay.

“This is not the country I joined to defend. I am turning in my papers. I’m moving to a farm.”

“Personally, I hope no one will be called upon to serve under a President T… I can’t bring myself to type the words,” said Rear Admiral John Hutton.

This is foolish delusions of conquest that passes for “foreign policy” among the Republican presidential candidates. It also highlights how the Republican Party freely uses the military as a political prop in their stump speeches and debates.

Just a few days ago, some of our most decorated generals called out the Republican war hawks for how utterly divorced their “plans” for defeating Daesh (ISIS/ISIL) are from reality; now it is clear that this utter disdain is echoed by our seasoned, knowledgeable military service staffers. Our brave military men and women are bound by a sacred vow to selflessly fulfill the orders of their commander-in-chief.

Something strange is happening to America, and if we continue down this path, and Donald Dump actually gets elected into the White House, and our military heads abandon ship, America may be in for a rocky road…