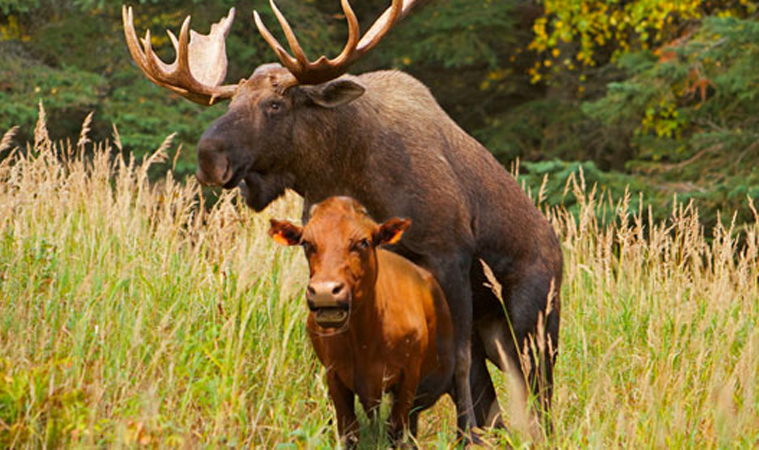 A moose that has escaped from the Calgary zoo is wreaking on local farms in the area as the 2,000-pound beast has allegedly been sexually assaulting cows in the area since its escape.

Local farmers in the area have warned authorities about a moose that has been seen on many occasions “humping” their cattle and possibly harming the animals.

“I saw this huge moose shagging one of my cows doggy-style” – Thomas O’Neill, local farmer

The farmer says he was first alarmed by the distress calls he was hearing from his cattle.

“I heard my cows mooing in distress, I thought there was a coyote or a wolf, but instead I saw this huge moose shagging one of my cows” he told reporters.

“Never in a hundred years did I ever think I would see that with my own eyes” he added, visibly shocked by the scene.

Although it is not known if the sex acts were consensual or perceived as an act of aggression by the cows themselves, the act of mating for the moose is a rather normal thing, explains veterinarian Annie Beaudoin, of the Calgary Zoo.

“This 3-year-old moose has been raised in captivity and due to its particularly aggressive nature was enclosed by itself for most of its life. It is the first occasion that it has had in its entire life to experiment with a sexual partner,” she told reporters.

“It is also breeding season and so the moose being a polygamous animal will try to mate with as many partners as it can find,” she added.

After a 48 hour wild goose chase, Wildlife agents still have not successfully apprehended the animal and all persons having information concerning its whereabouts should contact the Alberta Environment and Parks, Fish & Wildlife department.