Man Who Tries To Stab Priest ‘Overcomes By Power Of God’

A shocking footage has emerged of the moment an attacker was ‘felled by the power of God’ after he allegedly attempted to kill a priest in a church.

The video shows the hooded man leaping from his seat and pulling out a large knife as he runs up to the priest, Pedro Pablo Martin. But seemingly some other worldly force stops the attacker as he comes within inches of the priest – who bravely reacts with the words: ‘There is power in the name of Jesus’. 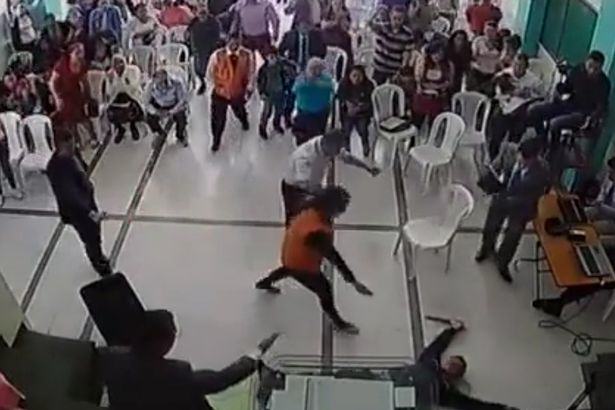 The priest repeats the same phrase over and over and the mystery assailant appears to lose his bearings and falls to the floor as if in the grip of a ‘greater force’. who was later disarmed.

The incident happened in the ‘Pentecostal IPUC Bosa’ in the Colombian capital Bogota – who wasted no time posting the video of the drama online and claiming it proves the power of ‘The Almighty’.

A spokesman for the church said:

We have a powerful God and his name is Jesus Christ. There is power in the name of Jesus.

But critics of the video have accused the church of putting on a show to gain followers. The priest himself, however, has insisted he was hiding nothing and the video was authentic.

Later, they called the police and the man was searched for weapons but let him go after church officials said they didn’t want to press charges.