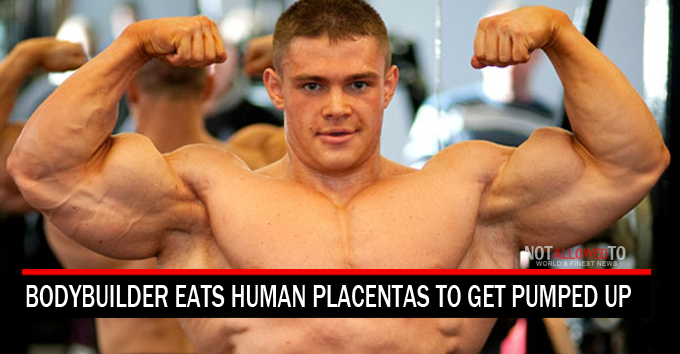 SAN DIEGO – A bodybuilder has amazing results after adding human placentas to his diet, a controversial choice he believes will be the next big thing for bodybuilders in the future.

“The man is a legend. He was always trying new stuff, he is a pure genius. He is the man that introduced human placentas to my diet in 2013″ he acknowledges. “He has brought bodybuilding to a new level, he has pushed all the known limits and keeps pushing them still today,” admits the 25-year-old bodybuilder.

He claims that only in few months he became a well known bodybuilders just because of his controversial diet.

“Even steroids cannot give such results” he acknowledges. “I made the greatest gains of my life, an unrivaled 75 pounds in ten months. The effects are instantaneous. I feel a burst of energy as soon as the food is digested and hits my bloodstream. People are disgusted when I tell them about it. It tastes just like steak!” he explains, visibly happy with the results.

Dr. Wilden White, a physician at San Diego’s General Hospital admits there is nothing illegal or dangerous to the procedure.

“Placentophagy, or eating the placenta, is common amongst most mammals,” he explains. “It’s a bit taboo of a subject so officially there has been no major study done on this, It can encourage breast milk production and even prevent post-natal depression” he acknowledges.

Some experts believe the nutrients that have passed from mother to fetuses over months of pregnancy are still packed inside the bloody organ.