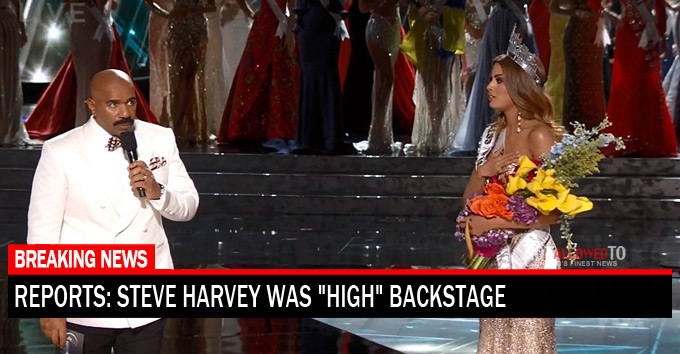 Steve Harvey made a major blunder when he accidentally announced that Miss Colombia, Ariadna Gutierrez, was the new Miss Universe when the crown was really supposed to go to Miss Philippines, Pia Wurtzbach.

The comedian had a lot of explaining to do when he met with the press after the show, and copped to his “honest mistake”, but most people were shocked when he said:

“The dishonorable thing would’ve been to leave it like it was,” he said. “It didn’t deserve to happen that way. Normally I don’t get high but I was a little nervous around all those fine a*s women, and knowing my past I had to do something to take the edge off, I didn’t know it was gonna be that strong” — Steve Harvey

May be he just ate a weed brownie..

“I’d like to apologize wholeheartedly to Miss Colombia and Miss Philippines for my huge mistake. I feel terrible” said Steve.

Despite his embarrassing mistake at the Miss Universe pageant, Steve Harvey will be returning to the stage next year as he signed a multi-year contract to host Miss Universe, and his paycheck is “more than they’ve ever paid before for a host.”