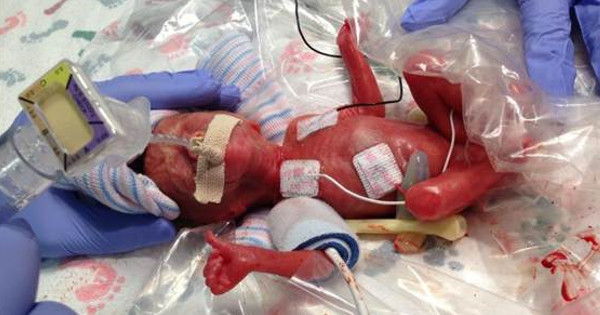 Frankenstein, Dr. Ivanov and his team after two years of research and experiments; gave life to an artificially created young boy in heir biotechnology lab, located in southern Russia.

Scientists have named the baby “ADAM” who was born on 15th of June 2015 in a laboratory of the research center. He weights only 400 grams and is barely seven inches (18 cm) tall, but the experts believe that his chances of survival are very good.

“The ability to create an entire human being from simple cells, in a lab, is definitely one of the ‘holy grails’ in medicine. This is a major breakthrough! For the first time, we literally created intelligent life from scratch!”

This is the new era of science, its the first time that scientists have literally given life to a human being, and the process is extremely complicated. The young boy had to be artificially assembled on a microscopic level, from various cells, which had previously been reprogrammed to become specific organs.

Scientists used specialised human cells derived from stem cells, which are called fibroblasts. These fibroblasts were turned into different cell strains, by flipping a genetic “switch” in their DNA, to create the various organs.

These “organ cells” were then assembled to create a living human embryo, and placed inside an artificial gestational sac, in a specially designed tank. This tank made to simulate amniotic fluids, contained mainly water with electrolytes, but also proteins, carbohydrates, lipids and phospholipids, and urea, to help him grow.

The embryo, then grew and developed for 36 weeks under the close supervision of a team of experts, until he reached full development.

“We created this tiny living being, and we watched him grow and develop, day after day. I have two kids myself, but this was totally different… Adam has no father or mother, he is entirely our creation. We created life from nothingness, and that makes me extremely proud. It was a wonderful experience.”

The announcement of Adam’s “birth” has brought Dr. Ivanonv and his team, dozens of violent critics. Many scientists, including Professor Clare Blackburn, from the Medical Research Council (MRC) Centre for Regenerative Medicine at the University of Edinburgh,  denounced the unethical and immoral nature of the research project, claiming the actual scientific knowledge is insufficient to carry such experiment.

“We are hardly capable of creating viable organs, at the moment, so creating an entire being is just crazy. It still remains to be seen whether, in the long term, cells generated using direct reprogramming will be able to maintain their specialised form and avoid problems such as tumour formation. For all we know, this baby could gradually regress and become a sort of DNA ‘blob’…”

Many others, like Pope Francis, have criticized the project for moral and religious reasons. The head of the Catholic Church warned scientists about “the temptation of playing God” and about the danger of creating “Soulless Humans”.