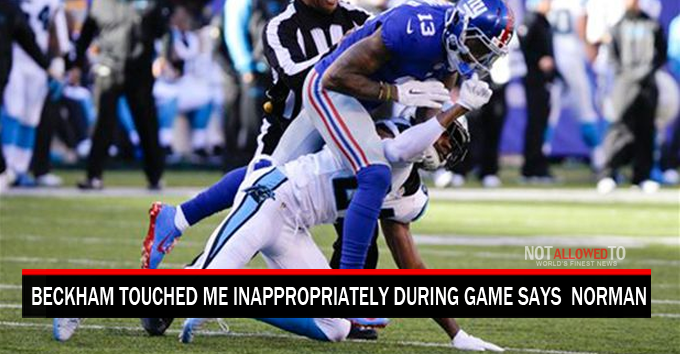 New York Giants Odell Beckham Jr. and Carolina Panthers Josh Norman clashed throughout the game on Sunday. Beckham lost his cool several times during the game, including a play in which he ran toward Norman and laid a vicious helmet-to-helmet hit on him.

Norman said that Beckham should have been ejected for his helmet-to-helmet hit but believes the NFL will get it right if it does indeed suspend the receiver.

“I don’t see how they didn’t see that from up top. Ring down and be like, ‘Get this guy out of here.’ They ring down for everything else. I had to get checked out myself. I mean that was crazy. But at the end of the day, they got it right, they saw what’s up !! If that wasn’t the blatant head to head, I don’t know what is,” Norman said.

Norman also accused Beckham of grabbing his behind.

“I thought he was giving me the old sports butt tap, but he grabbed and held on and told me it was soft,” stated Norman.

Beckham fired back at Norman, claiming… “He called me a f**, gay, a sissy and other homophobic terms. When he asked me if I sit between another man’s legs to get my hair permed I was finished with him. There is no place for that kind of talk in our game. I have many gay friends and I was defending their honor,” stated Beckham.

There has been wide speculation about Odell Beckham Jr’s sexuality as of late, and he says Norman used those rumors to get under his skin.

Norman comes out of the unhinged but entertaining battle between the two looking better, but the NFL felt he did enough himself to warrant punishment. Retaliation is never a good excuse for going after someone in the NFL, and the league wants to make this clear.