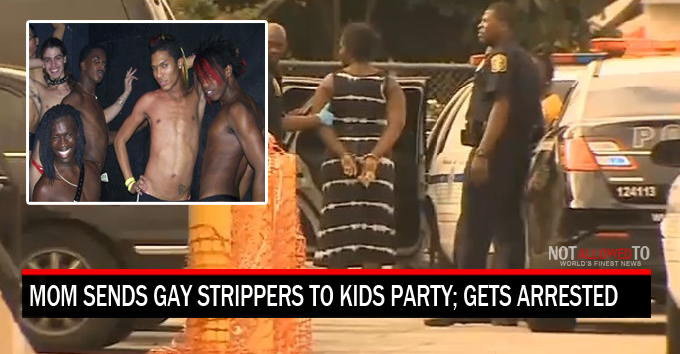 Detroit, Michigan | A woman was arrested after her rage and anger made her do something that shocked parents at 11-year-old’s birthday party.

39 year-old mother, Nikki Willis’ son was the only one in his fourth grade class who was not invited to a birthday party that was being held at a local park over the weekend. Some say, it was due to the young child’s violent behavior towards most of the class. But Nikki Willis, the mother, was not taking no for an answer.

Reportedly, at 2:25 PM on Sunday, a van pulled up at the park, where the birthday party was taking place. Two men in suits got out of the vehicle, and place some very large speakers approximately 20 feet from the picnic tables where the children were eating cake and ice cream.

Then, without warning, 6 barely dressed gay men jumped out of the van, music began blasting from the speakers and the scantily clad men approached the parents. They began bumpin’ and grindin’ to Tyga’s ‘Rack City’ singing “F*ckn’ all night, N*gga we ain’t celebrate,” according to eyewitnesses. One dad in attendance said he had to sock one of the guys in the throat just to get him off of his leg.

During all the confusion and chaos, the “gay entertainers” finally realized something was wrong. They were at the right party, but for all the wrong reasons.

When the police were called to the park, they investigated the incident to find that the entertainment was paid for with a credit card owned by Nikki Willis. An angry mother, whose son was sad that he could not attend the celebration.

Authorities went to Willis house and arrested her on several charges. One of them being indecent sexual exposure to minors and child endangerment. Willis was arrested and released on a $10,000 bond.