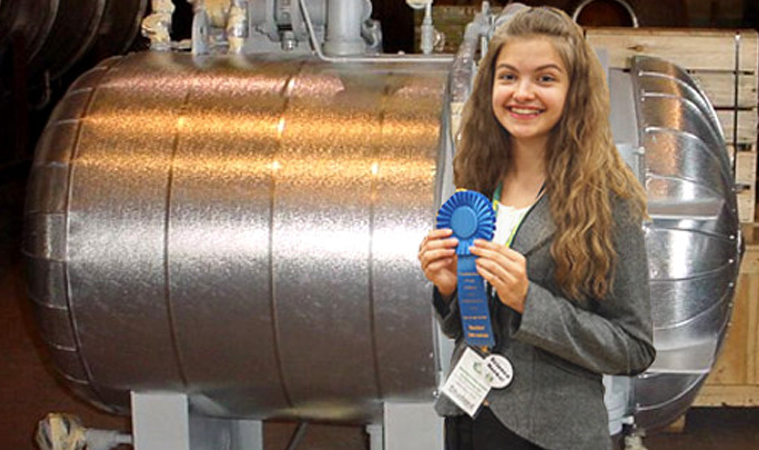 A teenager from Concord in New Hampshire has created 45-kiloton atomic bomb for her school’s science fair. 14-year old Kathryn Simmons is one of the 137 students who were participating this week, in this year’s New Hampshire State Junior Science Fair.

Daughter of an aeronautic engineer, she decided to present a complete A-bomb as her project in order to “show people that these things aren’t so dangerous”.

“Atomic bombs haven’t killed nearly as many people as cars or cigarettes, yet people have strong prejudices against them.”

She says building a bomb is hardly more complicated and dangerous than building a dishwasher.

“My parents helped me a little bit, but I did most of the work. I worked over 200 hours on it, but it’s complete and functional.”

She hopes that her bomb will show people that atomic bombs are “simple machines like any others” and help the public be less afraid of nuclear weapons.

A few organizations, including Greenpeace, have announced their intentions to disturb the event if her “weapon” is exhibited.

Despite these threats, Kathryn says she’s determined to “be in Denver and win.”

This isn’t the first time that a controversial school project stirs a controversy in the United States.

In 2011, a 15-year old student from Alabama was expelled from school after projecting to clone himself.