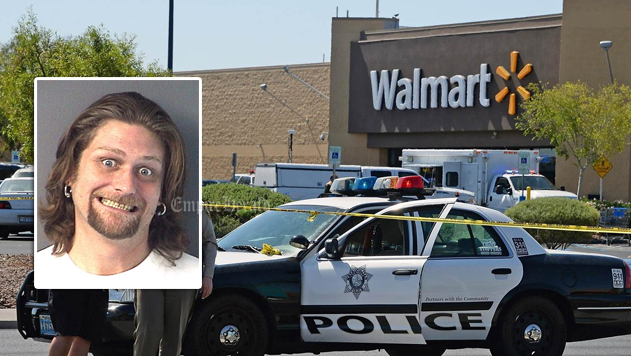 Reportedly, Wood and Douglas entered the Walmart at 11 A.M. and headed towards the food aisle. Both of the men had taken several cans of Pillsbury Cinnamon Rolls from the aisle and went to the bathroom. According to CCTV footage, Wood and his partner stayed inside the restroom for nearly 30 minutes before exiting.

“I was in the bathroom when I heard a man in one of the stalls moaning. I had no idea what was happening, I reported to authorities and went back to my station in the deli department,” said Mr. Peterson, an Walmart employee.

Mr. Wood was approached by Walmart Security, Wood told his partner to go out and wait for him.

“I asked Mr. Wood to show me the items he had taken into the restroom,” said Jones Nathiels, a security guard at Walmart. “Mr. Wood denied taking any items into the restroom and started walking away towards the exit. I followed him as he met up with the other person he was in the restroom with. I grabbed Mr. Wood and that’s when his friend squeezed KY Jelly in my face. KY got all in my eyes and on the floor. I attempted to grab Mr. Wood and that’s when both of us fell. I fell on top of him and that is when I heard a loud popping noise. Mr. Wood screamed loudly and then fluid started running from his backside. It was so disgusting but at least I caught the suspect.”

According to eyewitnesses, the EMT that treated Mr. Wood on the scene said the Pillsbury Cinnamon Roll can exploded due to the amount of pressure inside Wood’s Butt coupled with the shocked of the fall. Mr. Wood was treated for his injuries and then placed into the custody of Las Vegas Police.

The other suspect in the shoplifting incident, Mr. Jerry was also arrested. Both men are being held on a $3000 bond.