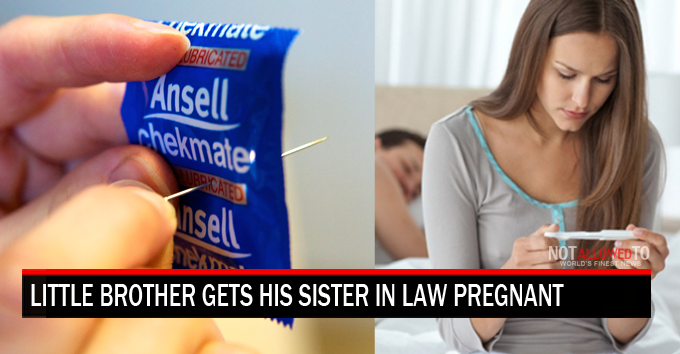 The story of a little brother who got his brother’s wife pregnant after a failed prank has went viral in less than 24 hours, since the Reddit user posted it… Here is the story…

Me and my older brother live together in an apartment in Toronto. His wife goes to college in New York, which is not close enough to travel to often. Because of this, he doesn’t see her in person very often, but they skype each other for hours every night. In November, it was my brothers birthday and his wife decided to take a week off school to come visit and celebrate his birthday with him.

On the morning of his birthday, while he was still asleep, so I left him a little birthday present. We have a board in the kitchen where we pin stuff like bills, so I left him a note that said “happy birthday big bro, have fun” and I also pinned a condom and a $50 bill to the board. And as a joke, put 3 thumbtacks through the condom. My brothers a smart dude, so I figured he would see the 3 thumbtacks, laugh, and throw it away. I thought wrong.

I leave for my friends house and everything goes as normal. I sleep over at my friends, come back home a couple days later, and celebrate my brothers birth week.

A little over a month later, on Christmas Day, my parents are over, and my brother makes an announcement. He tells us all that he is moving to Buffalo to live with his wife, who is now pregnant. Knowing my brother, I knew that he didn’t want to have kids until he was at least 40, so after the announcement I pull him aside to congratulate him and ask for details. He tells me that the baby wasn’t planned, and that when he had sex with his wife on his birthday, the condom broke.

I explain the whole thing to him, and to my surprise, he actually laughed. He wasn’t angry at all. After finding out his wife was pregnant, he realized that deep down he really wanted a kid, and didn’t realize it. Now, his wife has a baby on the way, he is moving to New York next month, and I gotta find a new roommate to help pay rent.

Every time this guy sees his little nephew, he will remember he is the reason why he is on the earth today.