LOUISIANA – Reggie’s Bar in Baton Rouge believe it’s okay to use a hand stamp at the door that reads “nigger” spelled backwards. A black student Taylor Ward, got Twitter fired up when she tweeted this picture. 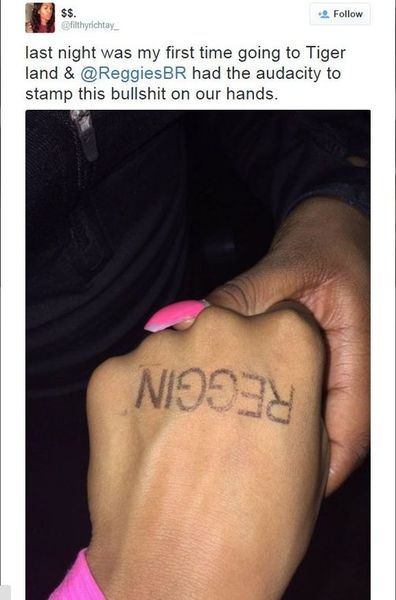 “At first glance, it says “Reggin” but after I noticed that the stamp spelled nigger backwards, I immediately showed my friends,” Taylor Ward told reporter. “We decided to bring it to the manager’s attention. However, all he had to say was, ‘It’s a stamp,’ so we left.”

Ward said that she was more put out by the manager’s reaction to the incident.

“I was really shocked. What upset me the most is that it was blatantly disrespectful and it was obvious that the design of the stamp was intentional,” she explained.

So, was she singled out because she’s black? Taylor says, hell yeah! But the manager claims “Reggin” is slang for going to Reggie’s and that everyone gets the stamp.

But folks aren’t buying his explanation, especially after seeing this pic of a Confederate flag hanging in the corner of the bar.