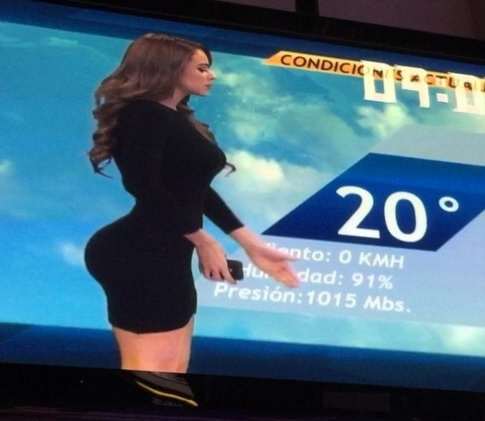 ‘World’s hottest weather girl’ has sparked a fierce debate after she wore a figure hugging dress which left viewers speculating if her ASSets had been enhanced.

Yanet Garcia, shot to worldwide notoriety after TMZ and Playboy described her as a ‘girl that makes you want to watch the weather forecast.’

But now, Ms Garcia, has left viewers wondering if she has had her bottom boosted after wearing another risqué outfit which pronounced her behind to such a cartoonish degree that it looked more like a sturdy bookshelf than a real bum.

The criticism has been pretty harsh, with critics branding her the girlfriend of Donald Duck and alleging she’d stuffed a pillow down her dress. While another joked: “Sue your surgeon. He’s botched this one.”

A critic of Ms Garcia ,claimed that she needs to be less distracting.

If this woman was a true professional she would pay more attention to her job and not her tight dresses.

If she’s well known it’s because of her bottom not her work.

What a shame that she takes pleasure out of the fact people speak about her butt and not how well she does her job.