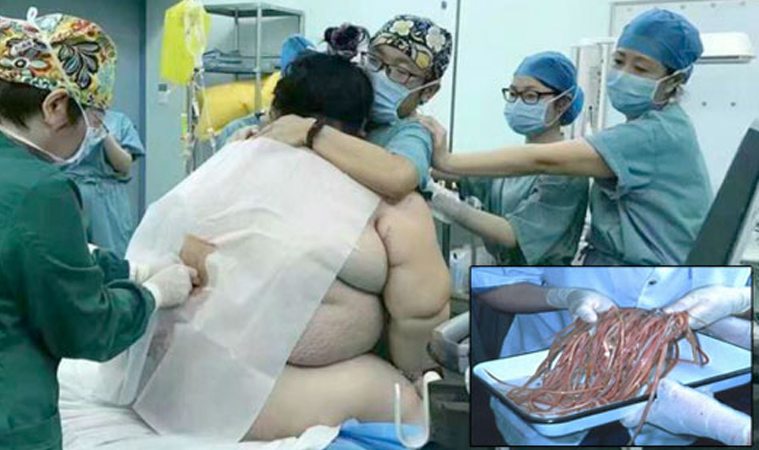 A 28 year-old woman has given birth, not to a human child but to a giant tapeworm, at Kyushu Central Hospital last night reports the Tokyo Sunshine News.

Yukiko Kunitake, gave birth to a 7.7-meter long tapeworm that had apparently parasitized her body for up to 6 years according to doctors.

The woman was in excruciating pain and believed she was in labor underwent an epidural anesthesia to relieve the pain. She said she had no idea the parasite was in her body and burst into tears when she learned she wasn’t pregnant at all.

“I thought it was my baby’s umbilical cord, but they kept pulling and pulling and nothing came out,” she told reporters in tears.

The woman and her husband were devastated to learn she was, in fact, not pregnant.

“Everybody said I was too fat to carry a child, I was so proud to prove them wrong,” she said, visibly disheartened.

“I should’ve realized something was fishy when she told me she still had her periods,” her husband told reporters.

“She was really moody and would cry for no reason at all. She was also feeling really tired all the time and was always hungry. I was 100% sure that she was pregnant,” admitted her husband.

“She first thought it was because she ate a lot of sushi at work, but I told her that fish don’t carry this kind of tapeworm,” explained Dr. Arai Hashimoto to reporters.

“She then told me they would mix raw pork into the sushi when the prices of tuna were too high or the deliveries were late,” he added.

Tapeworm infection is the infestation of the digestive tract by a species of parasitic flatworm that is sometimes ingested by consuming undercooked meat. Once inside the digestive tract, a larva can grow into a very large adult tapeworm.

The largest tapeworm to ever have parasitized a human being in history reached an impressive 203-feet-long or 62 meters and weighed an estimated 83 pounds. It was found in the body of a 626-pound Mexican man in 2006.