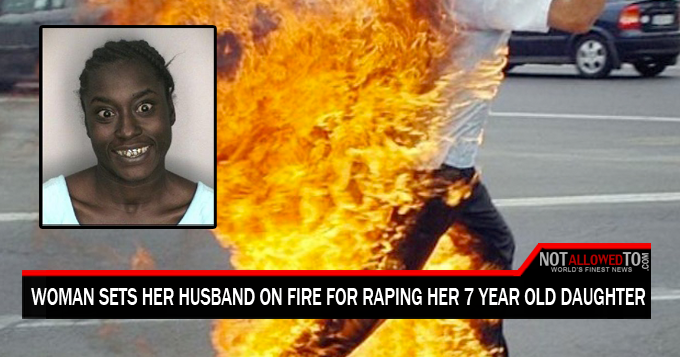 When a 40 year-old woman, Tatanysha Hedman found that her husband, Vincent Phillips, molested and raped her daughter, from another man, she took matters into her own hands and set her husband on fire.

According to police report and investigation, the mother waited for her husband to go to bed, then when he was asleep, she poured a petrol on him and lit a match.

She then admitted to police that she intentionally set him on fire because shooting him would have been ‘too nice.’

The state of mind of Hedman, at the time she set Phillips on fire, is being questioned, “should Hedman’s mental state at the time result in a lenient sentence when it comes time for the criminal court to address her situation of the crimes she is being charged with?”

Phillips didn’t die in the blaze and is being charged with sex crime. Hedman faces arson charges and assault charges.

People are worried that the state will punish Hedman too harshly for her crime of passion.
Currently, Hedman is in jail awaiting a court hearing.

Many people on social media claim that her decision was correct, and the mother should not be givenany hard punishment.