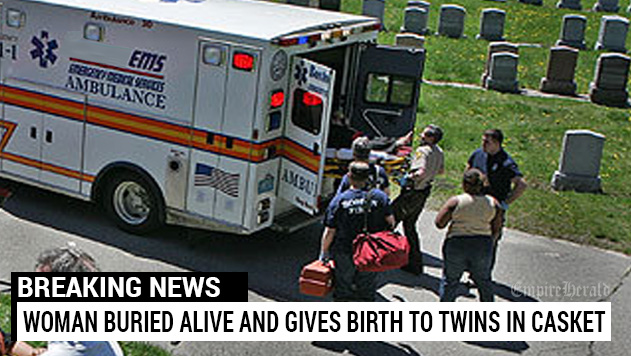 FLORIDA | Newborn twin girls are recovering in a hospital after a very bizarre situation. A 37 year-old woman named ‘Sarah Duncan’, gave birth to twins after being buried alive by her husband who she says “didn’t want to pay for child support.”

According to report, it all started when the parents of a young boy Harris Wood, were mourning the loss of their deceased son. The family and friends was paying their last respects at the burial site when, according to eyewitnesses, a “haunting” occurrence took place.

Reportedly, the family was saying their last goodbyes, they heard cries of an infant. “After the casket was lowered into the grave, everyone who attended the funeral paid their last respects and tossed flowers onto the grave site,” said the parents of deceased Mr.Harris . “But then we started hearing these cries, like babies crying. But there was no one around with an infant. They were accompanied by the screams of a woman.”

That’s when people said they immediately called 911 to report the suspicion once they realized the sound was coming from underground. They immediately demanded for the groundskeepers to dig up the soft dirt that covered the casket. They retrieved the coffin, which was pried open by firefighters and discovered Sarah Duncan and two newborn twin girls inside.

According to the police report, the discovery was a twisted plot to cover up an attempted murder crime. The original body of the deceased was switched before the funeral with the body of the funeral director’s wife.

Michael Livingston, owner of the funeral home, attempted to murder his wife after drugging her and burying her alive. Livingston had given his pregnant wife an overdose of sedatives, however not enough to kill her. Police recovered the body of Mr. Harris in the funeral home’s storage.

Sarah Duncan and her newborn twin girls are in stable condition at a local hospital. Michael Livingston is being held on a $1 million bond and is facing attempted murder charges.

The family has properly buried their son, Jerry Harris, in another nearby cemetery.