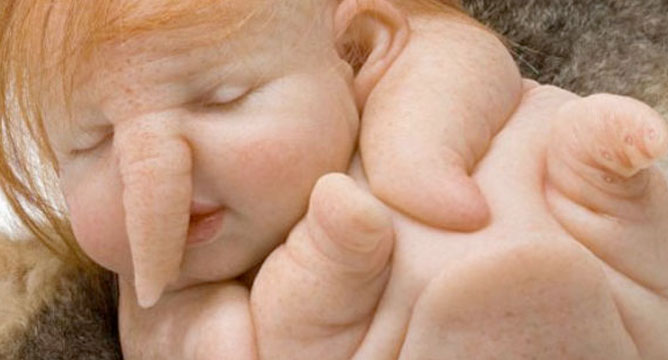 Norwegia – A couple recently gave birth to a half-human/half-elephant hybrid that many Hindu practitioners believe to be the reincarnation of the popular deity Ganesha.

He is commonly depicted as a man with several limbs and the head of an elephant, something that if it were to actually exist, the very sight of it would haunt us to the grave.

Alexandar and Lola Andersen first attempted to keep their child a secret from the world but soon pictures of the child along with the identity of the family leaked to the media. The Andersen’s found themselves celebrities in the country of India.

“We wish they would stop hanging outside of our home. Why won’t they just leave us alone? We’ve already been through enough. My baby looks like an elephant and even worse, he’s a ginger. If they hand me one more basket, I’m going to stab them in their fase,” said Lola Andersen, the baby’s name.

When asked of the child’s name, father Alexandar only answered, “we never really gave it a name. To be quite honest, we were just going to call it the creature that we keep in the basement.

We were essentially just going to keep the little gingerphant in the basement and feed him. This does open up some new options. We might sell him to India. They’d probably let him live in the Taj Mahal.