A rare footage of a pod of Whales hunting down a shark…. 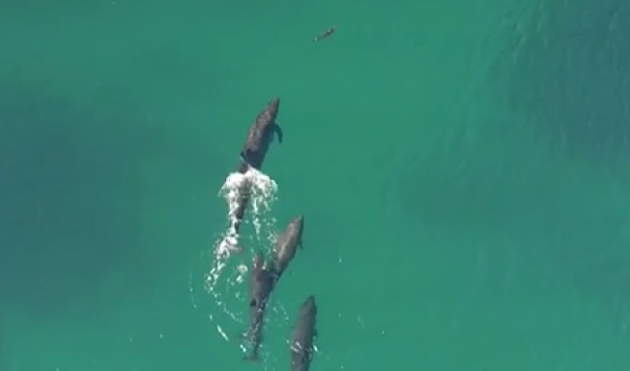 The footage appeared on 7 News Sydney and shows what look like false killer whales hunting down a shark off the coast of Cronulla, a suburb of Sydney.

According to Mashable, Bruno Kataoka filmed the encounter with a drone. The four whales tracking down what looks to be a juvenile shark as it attempts to flee. Moments later, one of the whales grabs onto its prey with its jaws, dragging it down to the bottom of the sea, to be eaten.

“That kind of footage is just so rare to catch,” marine biologist Georgina Wood told the television station. “We see a lot of action from humpbacks here in Sydney, especially during these winter months, and they can get up to around 14 to 15 metres (45 to 49 feet) long,” she added.

They’re called false killer whales because they are much smaller than humpbacks, Wood explained, appearing to measure around three to five metres (9 to 16 feet) long.