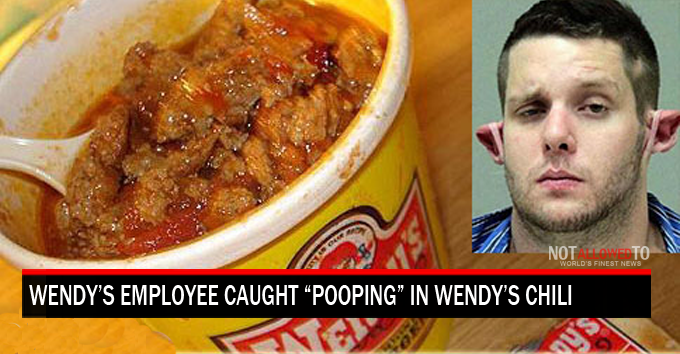 A Wendy’s employee has been arrested after he admitted to “pooping” in multiple batches of chili since 2013.

28 year-old Brian Casper, had been an “on time and reliable employee,” according to the manager and coworkers at the Mobile, Alabama location.

The fact that this happened was a shock to everybody at the restaurant, including the several thousand customers who may have consumed Casper’s feces. After the story aired yesterday that the chili may have been contaminated, several loyal customers stepped forward.

“I’ve been eating at this Wendy’s for at least seven years,” said Sharon Day, a Wendy’s customer. “I used to order the chili all the time, but I don’t know… it started to taste weird. It had a taste that I couldn’t put my finger on, I don’t know what exactly it was. Now I know and I am absolutely appalled.”

“I never really liked Wendy’s chili, until I ordered it a couple years ago,” said Raymond Wilson, another Wendy’s customer. “I thought it tasted different. I thought they changed the recipe. But now that I know why it tastes different, I think I’m going to puke. I ordered that chili at least twice a week.”

Several of the customers say they are considering a class action lawsuit, but nothing has been filed as of yet. Casper was caught by another employee when he exited the bathroom with a cup and was seen adding it to the chili bin. The employee retrieved the ingredients and notified the manager, who then called the police. When confronted, Casper admitted he had been “flavoring the chili” for over 2 years.

Casper was arrested, booked on several charges and is awaiting his court hearing.