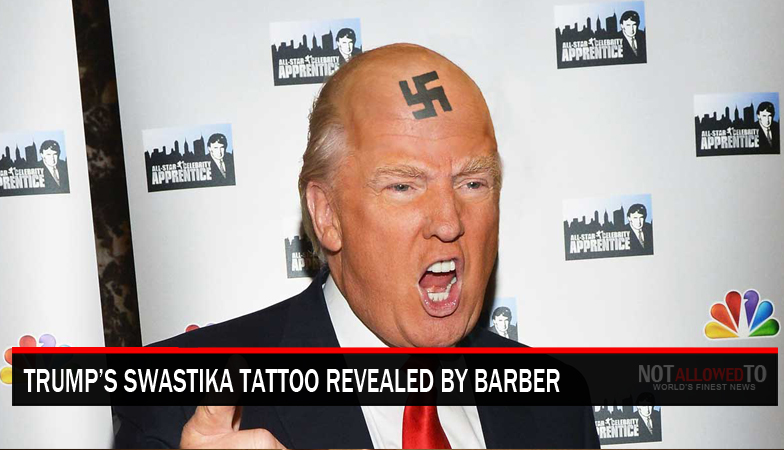 Donald Trump has no choice but to continue the use of a ridiculous hair piece, after his former barber revealed it is used to conceal a swastika tattoo on his scalp.

Despite years of ridicule for his decision to cover his head with possibly the most fake looking thatch in world politics, the presidential hopeful actually has no choice in the matter according to his former stylist.

Retired barber Chuck Williams told us, “Donald doesn’t enjoy that preposterous hairstyle, he’ll happily admit it makes him look like a vein moron – but it’s simply a case of having to.

The swastika is clearly visible unless you back-comb, and fold over what’s left of his hair and then supplemented it with some synthetic hair that looks like horse straw.

He never told me the origin of the tattoo, and he never liked to talk about it with me, he just insisted that I do everything in my power to make sure no one ever saw it. I guess his hair regimen has become even more important since he decided to enter the presidential race.”

Most of Trump’s supporters say he should just shave his head and embrace the tattoo and all it stands for. “His comments on the Muslims and Mexicans already told us what he thinks of people who aren’t white and blonde, so why not just come right out and reveal his true self?” said Trump supporter Mike Sanders. “To be honest, it would probably secure him a lot of votes in some parts of the country.”