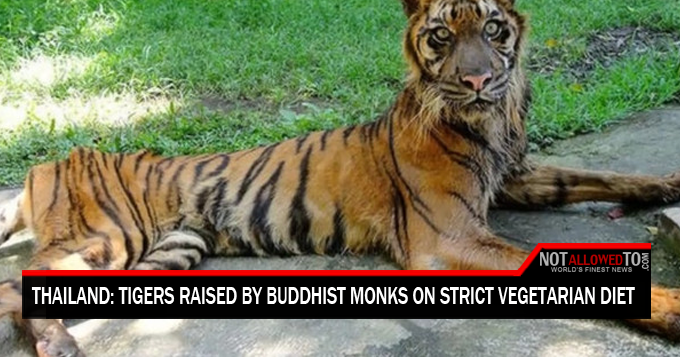 Kanchanaburi | Thailand’s Tiger Temple, is a Buddhist Theravada Monastery where tigers roam freely and are fed solely on a strict Buddhist vegetarian diet.

According to reports, the tigers are fed an exclusively plant-based diet, which resonates with the Buddhist philosophy of the monks. Many animal rights activists believe the animals are mistreated.

“Some people say that we starve the animals to death” replies Pho Tan Bui, a Buddhist monk. “But death is part of a natural process, everyone must die one day. As everyone is born, everyone must die, there is nothing abnormal about death” he explains.

Apparently, the Buddhist monastery do not seem to be concerned that death rates of the tigers are abnormally high and that the average lifespan of tigers in the monastery is half that of those living in the wild.

“Here these tigers are free to become true sentient beings. We help them avoid a predatory life of killing to feed themselves, their chances to reincarnate into a higher being are infinitely multiplied,” admits Bin Nay Tran, a monk at the monastery. “Is the jungle life, filled with the necessity of pursuing and killing other animals a good life?” he asks. “Here they are fed and need not to hunt and prey on other living beings.” he told local reporters. “If they live shorter lives, but they live happy lives, is not that which is important?” he adds.

World Wildlife Fund believes the treatment of the tigers is cruel and should cease immediately.

“We requested Thailand authorities to put an end to these activities many times, but the breeding keeps on and brings an important number of tourists in the region, so officials are not very comprehensive,” Sarah Gablin, a spokesman for WWF explained reporters. “You can’t feed tigers with a grass-based diet. Tigers are predators, they are supposed to eat meat, it is no surprise the average lifespan of a tiger is half of what is expected in their natural environment” she adds, visibly distraught by the whole affair.

A report by National Geographic concluded that over 700 tigers have died prematurely since 2008, averaging a lifespan of 4 to 8 years, compared to 10 to 15 years in the wild.