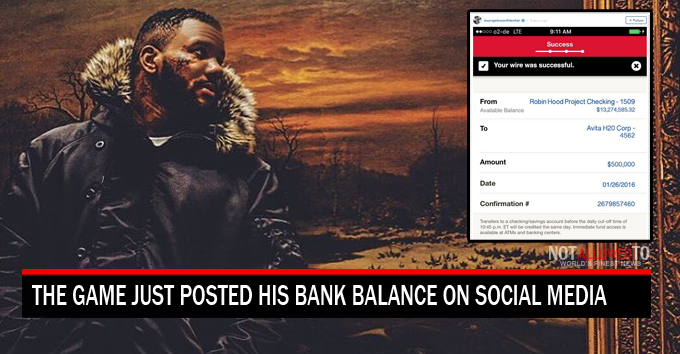 It’s good to see celebrities giving back and actioning their words for the good of humanity.


The Game donated $500,000 of his own money to the water crisis that is currently hitting Flint, Michigan, sent across $1million in water bottles, then challenged any celebrity to match him.

However, in his Instagram post, in which he made his official announcements, he didn’t blur out any of the details from his charity’s bank account – which showed a grand total of $13,274,585.32.

#WATERFORFLINT PROOF !!! So, I’m on tour & not in the US as I’d like to be to help with this water crisis in Flint, Michigan 1st hand…. #1 because my younger sister & her children live there & 2nd because I care. Most celebs on here faking using the word “Pledge” in their so called donations are not fooling anyone ! The truth is the population in Flint, Michigan is about 105,000 people & it takes at least 9 bottles per person a day just to use to bathe, brush their teeth, drink & cook with… So on behalf my charity @TheRobinHoodProject I am donating $1,000,000 in water bottles..$500,000 coming out of my own pocket (which is everything I’ve made on tour up to this point) & the other 1/2 being met by @AvitaWater & the 1st drop is being made TODAY 1pm eastern time at “Food Bank East Michigan” 2300 Lapeer Road flint Michigan 48503 & the 1st drop will be 1400 cases of water equaling about 33,000 bottles today & everyday that follows until 1,000,000 bottles of water are dropped !!!! To those who think it’s easy getting this water to Flint, it’s not so the people who are PLEDGING they are, show us.. We want proof !!! Stop using others tragedies for your own celebrity gain… You’re not fooling ANYONE ! I seen @Madonna & @JimmyFallon’s $10,000 donations… that’s cute, but not nearly enough…. So I challenge both & anyone else in the world to match me & DONATE $1,000,000 in bottled water to Flint, Michigan & we want proof, shipping order receipts, bank wire receipts, pictures etc……….. No more pretending to give a fuck….. I donate money all the time & it comes out of my pocket & never once have I written anything off on my taxes because that’s not why I do it !!!!!!!! So, if any other celebrity wants to MATCH MY MILLION here’s the site where you can donate http://selfmadefoundation.org or pick your own.. JUST MAKE SURE THE WATER ACTUALLY GETS TO THE PEOPLE WHO NEED IT !! & I don’t wanna see anyone else using the word “PLEDGE” in their donation or press release because we know that that means. “YOU JUST TALKING & TRYING TO MAKE YOURSELF LOOK LIKE A HUMANITARIAN” !!! #WaterForFlint #TheRobinHoodProject #AvitaH20Corp #SelfmadeFoundation #HUMANPOWERBALL

With this only being his charity bank account it’s safe to say that $13million is only a fraction of his wealth (he is reportedly worth $25million). Let’s hope your message puts a few celebrities under pressure.