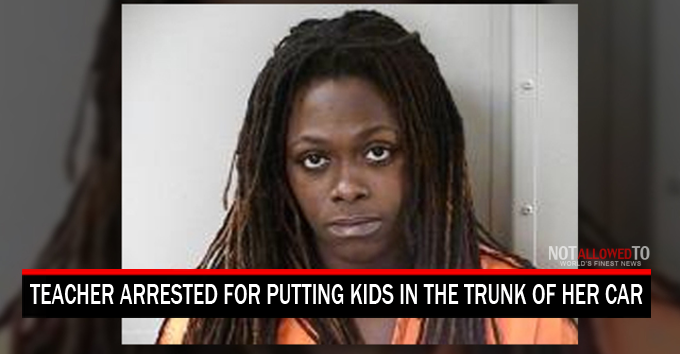 La Vergne, Tenn – A 33-year old teacher, Andria James, was arrested and charged with reckless endangerment after police officers allegedly found three children in the trunk of her car.

According to report, a resident contacted Police Sunday night to report a woman with children in the trunk of her car after she spotted her at the gas station.

Surprisingly, when the officers arrived, they discovered three children, ages 9 and 10, in her vehicle’s trunk and there were also six other children inside the vehicle. Apparently, James is a teacher at Alex Green Elementary Impact School in Northwest Davidson County.

“When I got there all the kids was piled up inside her vehicle, crying , scared. Was crying for their mothers, you know. I was very shocked,” said Rogers. “I was very angry, very, very angry, but I kept myself together, as an adult an a mom of 6 kids”, Regina Rogers told News Channel 5 in Nashville.

Rogers’ daughter, 9-year-old Jashawna Roucker, told reporter, “they did things like swim at the YMCA, go to the skating rink.

Andria James spoke to FOX-17, claiming two of the kids were her children and that they had stopped for pizza at the gas station. James then said that the children were playing around and that is how they wound up in the trunk.

The children’s parents were called to the scene to pick them up and Andria James was taken to the Rutherford County Sheriff’s Department. She has since been released on a $1,000 bail.