Texas – A 15-year-old Anthony Ruelas got suspended after rushing his classmate to the nurse when she began to suffer from an asthma attack. Yes, you read it right. He just saved her and he got suspended from Gateway Middle School.

Reportedly, during the asthma attack the class teacher was waiting for the nurse’s email reply. Fearing for the girl’s life after several minutes of waiting, Anthony decided to leave the room and carried the girl in the nurse’s office.
Apparently, the teenager broke the school rules when he left the room without permission and rushed the girl to the clinic.

The teacher stated: “During 5th period the girl complained that she couldn’t breathe and was having an asthma attack. As I waited for an email reply from the nurse the student fell out of her chair to the floor. Anthony proceeded to go over and pick her up, saying ‘F**k that we ain’t got time to wait for no email from the nurse.’ He walks out of class and carries the girl to the nurse.”

And because of his heroic action, he was suspended. Somehow, though Anthony admitted he broke the rules, he said he’d do the exact same thing again. “I broke rules but, she needed help, like, she needed help.” 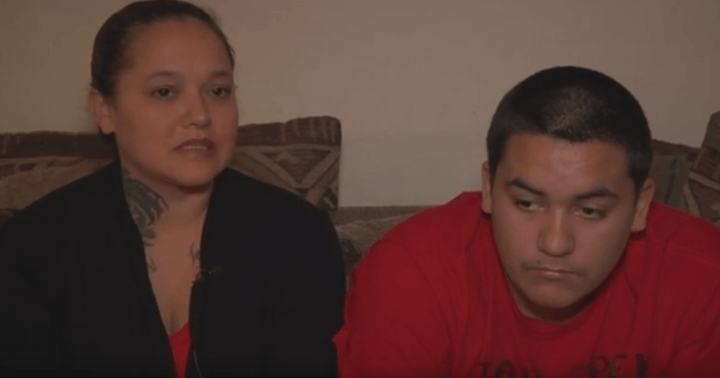 “I don’t think he should have used that language, but as far as getting suspended for walking out of class, he could have saved her life. He may not follow instructions all the time, but he does have a great heart.” said, Mandy Cortes, Anthony’s mother.

Meanwhile, as for the girl Anthony saved, she thanked him and told him that she was ok through text. Anthony Ruelas can return to school after his suspension, but her mother is now considering home-schooling him.

Do you think he deserved such punishment? Let us know your thoughts by commenting below.