Star Wars Fan Gets Botox to Look Like Jabba the Hutt 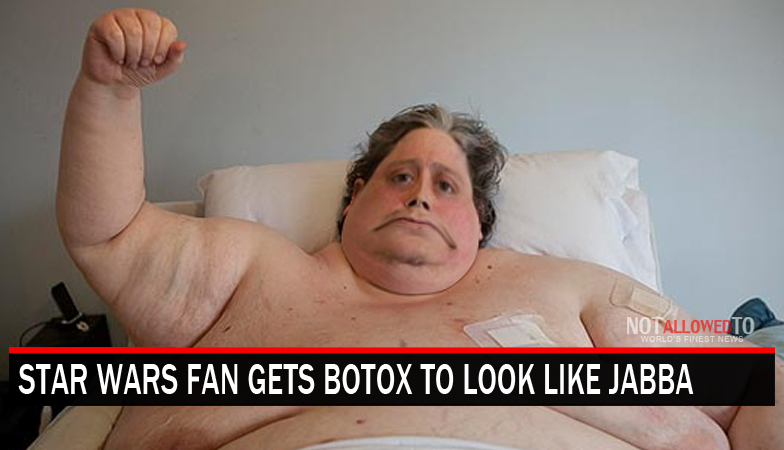 LOS ANGELES – A 41-year-old Star Wars fan from California has undergone massive surgery and an botox injections to resemble his childhood hero, Jabba the Hutt.

Antonio Carreras has invested more than $300,000 and underwent several surgical operations as well as adopting a strict diet high in calories to become the identical copy of the notorious criminal, Jabba the Hutt.

“The results of the operations are simply staggering,” admits the 41-year-old fan. “I could barely hold my tears when I first saw the results,” he admits in tears. “Jabba the Hutt commands respect and everyone fears him. I was the victim of a lot of bullying as a child and the character of Jabba the Hutt, even though he is fiction, has comforted me many times throughout my childhood” he told reporters, visibly emotional.

Although the operations seems to please Mr. Carreras, his relatives are not nearly as excited about his new appearance.

“I love my brother, but he visibly needs therapy,” warns his elder brother. “You don’t go and mortgage your house to look like a monster” he lashed out, visibly furious.

“I just don’t understand why he never told us before he started these operations,” adds his sister Tania. “It’s the kind of surprise you wouldn’t even wish to your worst enemy,” she insists.

Although his siblings are less supportive of their brother’s transformation, his mother believes what makes her son happy is what is important in the end.

“I’ve always been proud of my son and I have always found him beautiful,” admits his mother, Juanita. “I am an old woman, I don’t understand anything about this Star Wars nonsense, but as long as he follows God’s path I will support my son’s decisions,” she acknowledges. “There are worst things in life, he could’ve become a homosexual,” she told a local reporter, visibly relieved.

In all, the dream of Antonio Carreras will have cost him nearly half a million dollars, but despite these impressive costs, Mr. Carreras acknowledges that “to realize one’s own childhood dream in life is priceless”.