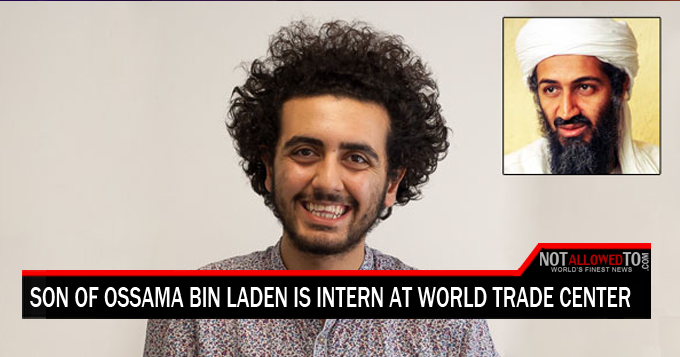 New York City | Five years after the execution of Ossama bin Laden, the world’s most wanted terrorist, one of his son is in fact an intern at the World Trade Center, a building his father is blamed for having stricken down with two planes on the infamous date of September 11, 2001.

“My mother married Bin Laden in 2000, but she soon fled from Yemen while she was pregnant with me, she was a fighter and still is,” he admits proudly.

“My father was already dead in 2001, so all that news about him being killed in 2011 is just CIA propaganda. He had to be constantly plugged to a dialysis machine in Dubai National Hospital months before he succumbed to kidney failure,” his mother has always told him.

James al-Sadh remembers how his mother always despised his father.

“It is the ultimate offense that my mother changed my last name from bin Laden to al-Sadh, it shows how much she hated him,” he recounts. “Since we immigrated to the U.S. years later, never did she mention his name ever again,” he told reporters. “She was forced to marry him at the age of 18. I’m glad she took the risk of bringing us to America. Even today, many of her family members will not talk to her because of what she did” he admits, visibly saddened by the whole affair.

Even though the young man never met his father, he claims he has no regrets of ever meeting him.

“I never met my father, but my mother always told me he had died in 2001 anyways, months before I was born, so there was never any chance I could have met him anyways,” he acknowledges. “My father was already dead in 2001, so all that news about him being killed in 2011 is just CIA propaganda.

Although the CIA claims it executed Ossama bin Laden in 2012, a number of experts have asserted in the past that the mastermind behind the September 11 attacks, including a controversial French intelligence report, died at the National Hospital in Dubai in July 2001, two months before 9/11.