Home » News » Saudi Imam Claims “A Woman Can Only Go To Heaven, if She’s Accompanied by a Male Relative”

Saudi Imam Claims “A Woman Can Only Go To Heaven, if She’s Accompanied by a Male Relativ 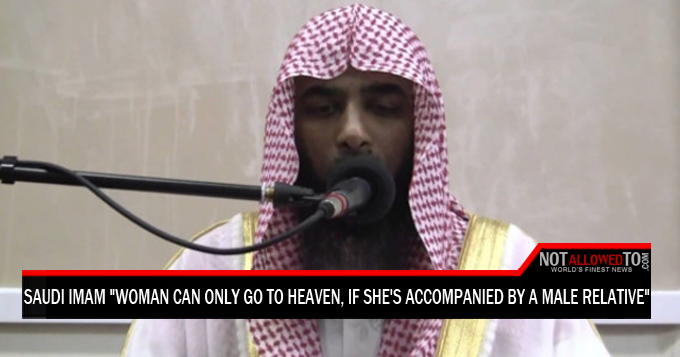 SAUDI ARABIA | The Arabs surely opening to an increased role for women in society, as for the first time in the country’s history, a religious leader has declared it possible for women to be admitted into Heaven.

Reportedly, the progressive Imam She‎ikh Salah Al-Budair said that women can be admitted into heaven, as long as they are accompanied by “Mahram relatives” (male kin, who is not suitable for marriage under Islamic law).

“Many people will be shocked, but women can indeed be admitted into Heaven,” the Imam preached. “ The Prophet said ‘No woman should travel except with a Mahram’. Ascending to heaven is the greatest trip in every Muslim’s existence. Woman can get into Heaven, as long as she’s accompanied by a man of her family…”

A group of religious leaders and scholars from across Saudi Arabia, signed a declaration condemning the Imam’s sermon as a blasphemy.

“It’s our responsibility to spread the true word of God, and all irresponsible people like Sheikh al-Budair are tarnishing Islam are contrary to the teachings of the Quran and the Hadith.” asserts the declaration.

The scholars said that many deviant groups and individuals over the centuries have been responsible for the spreading such false beliefs, which are not part of the teaching of Islam.

The simple fact that the progressive Imam wasn’t arrested, suggests that some influential members of the Royal family may have secretly come to his defense.

Rumors have already begun to spread, relayed by the Saudi media, that Princess Fahda bint Falah bin Sultan, the King’s second wife and mother of the Crown Prince Mohammed, could have used her influence to keep the religious leader to be arrested.

She‎ikh Salah Al-Budair is expected to preach again at the Prophet’s Mosque next Friday, and his sermon promises to draw a lot attention from both the media and the religious authorities.